Cops Arrested For Passing Illegals In Exchange of ¢20,000 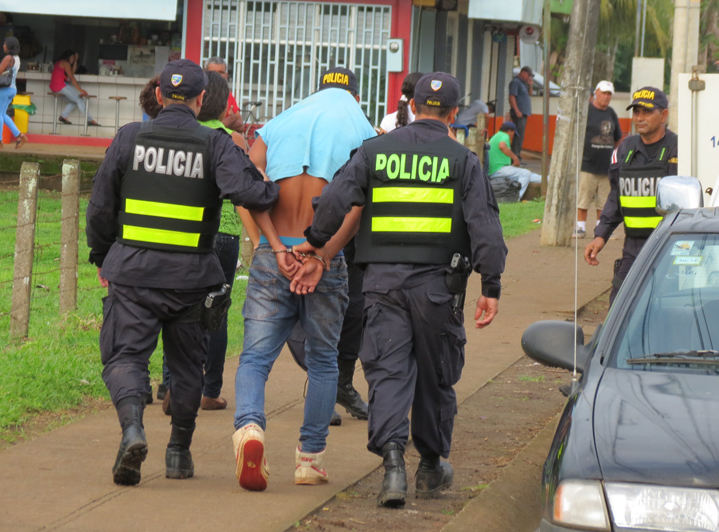 COSTA RICA NEWS – Two seasoned police officials may be spending up to six years in prison for taking bribes from illegals crossing the northern border with Nicaragua, in the area Los Chiles.

The two officials, identified by their last names, Hurtado and Lewis, were formally charged Thursday in the Juzgado Penal de Los Chiles, after being detained earlier while on duty and in uniform,  on suspicion of corruption, by fellow officers.

According to the Article 348 of the Penal Code, the two officers (Hurtado with 20 years and Lewis with 15 years, on the police force) face from two to six years imprisonment and from ten to fifteen years off any police force, if convicted of receiving a bribe and derelict of duty.

A third man, identified by his last name Bonilla, was also charged and faces from three to eight years imprisonment, under Ley General de Migración (Immigration Law), for “coyotage”, acting as a coyote for the movement of illegals across the border.

The arrests followed an investigation by the La Fiscalía de Los Chile (prosecutors office in Los Chiles), near the Nicaragua border, after six undocumented Nicaraguans complained of having paid some ¢50.000 colones (US$90 each) to a coyote, of which ¢10.000 was paid to each police official, for free passage through the area.

Evaluating the situation, the Fiscalía de Los Chiles said it had obtained a written statement and visual recognition by the foreigners of the people before they were deported.

Alan Obando, regional director of the Fuerza Publica (police) said that several weeks ago an operation called “control sobre control” (control of control) was put in place, that includes investigating questionable actions of subordinates. This led to the arrest of the two officials.

Obando added that they will be relentless in pursuing those who commit acts of police corruption.

About 10 days ago, also in the area of Los Chiles, police detained another coyote, identified by his last name Lacayo, who was arrested for the illegal movement of undocumented. Lacayo is currently in preventive detention awaiting trial.

Lacayo, a Nicaraguan national, is accused helping five of his countrymen, for ¢60.000 colones each, to cross into Costa Rica. The illegals were headed for work in the agriculture fields of Barranca, Puntarenas.