Beyond its reputation as a nature destination, Costa Rica is also a ‘Disneyland of sex’ for a special kind of visitor, the sex tourist.

Marisa would not fall for a Gringo, but would definitely for a European. While nursing her rum and soda at the Blue Marlin at the Hotel Del Rey, she tells of how North Americans only know how to spend money as if the world would end tomorrow, “they say you only live once, and two months later they don’t even remember you”.

[two_third last=”no”]At the moment, in the bar there are only a few seniors of the “Yunái: they are gentlemen in shorts and fishing shirts, like Santa Claus on vacation. Others seem freshly bathed, with shirts tucked into their pressed jeans. They are fifty-somethings one would imagine with binoculars watching birds in the jungles of the Sarapiquí, and not in the epicentre of the capital’s sex trade.[/two_third][one_third last=”yes”][colored_box color=”yellow”]This article is a translation of the report by Dario Chinchilla published in Revista Dominical in La Nacion, April 7, 2013.[/colored_box][/one_third]

In the early ’90s, Costa Rica opened a portal to luxury ecotourism, but also cracked open a back door, without official signs, welcoming travelers who came for sex for $100. That’s an opening as any other, which many customers owe to Viagra and open to both sex marathoners as the grandfather who wants to play having a Latina girlfriend.

Of course they all come to Costa Rica looking for sex, but more than that a fraternity about cheap sex and women in the tropics.

An American looking like Woody Allen came to Costa Rica with his wife on a beach vacation. They stayed in Jacó and one night when his wife went to bed early, he went to town. Two girls covered one eye and shortly after he was receiving oral sex. On the next visit to the country, “Woody” had the foresight to come without his wife and in his subsequent visit, had no wife.

This is the opening story of the book Viejos Verdes en el Paraíso (2009) by Costa Rican researcher and historian Jacobo Schiffer that can be downloaded free online in e-book format. The book was prepared with statistical information, analysis of internet forums and structured interview between 1997 and 2004.

One of the findings of the book is that in many cases, as in the case of “Woody” – the so called nature tourists can migrate to sex tourism.

This also happens with “business tourists”. This is confirmed by Bob, an American originally from Illinois who lives in the country for two years. While he throws back an Imperial (beer) in a bar near the Morazán park, Bob says he visited Costa Rica for the first time seven years back “without knowing anything about the country”. He came to San José for a business meeting. On his third day, he was buying sexual services at the hotel Del Rey.

“A vast majority of tourists come to Costa Rica for what is, for the beaches and mountains and all that is beautiful outside of San José; but a tourist has no reason to stay in San José other than prostitutes” says Bob, who stopped buying sex two years ago, when he settled with his current partner.

There are no official figures on the number of tourists coming to the country for sexual services. However, in a study done in 2012 on the impact of tourism in San José, environmental sociologist at the Universidad Nacional (National University), Eduardo Mora Castellanos, estimated that about 3,400 tourists stay overnight on an average night in the city, and about 400 are sex tourists. 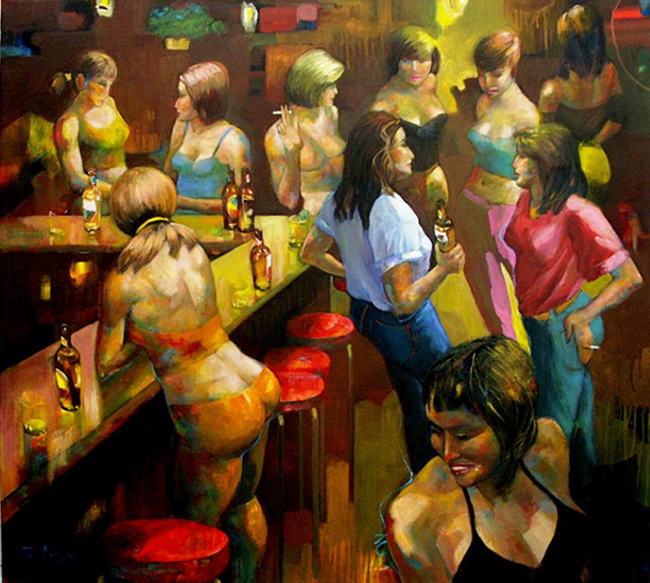 Prostitution is illegal in the United States, other than the State of Nevada. According to Bob, while in Costa Rica you can hire a sex worker for $100, the rate does not fall below $500 in Las Vegas.

“Prostitution is legal here, right?” asks Matt as he freezes in motion of an Imperial moving toward his mouth. When he confirms that it is legal, he relaxes and keep drinking. A New York construction worker for 30 years, he admits he is younger than most of his countrymen who come to the country for sex. Matt says he chose Costa Rica – and no other destination in the region – because he feels it is a friendly country towards “americanos.” Americans cannot travel to Cuba, and he would not feel as safe in Colombia or Mexico. “In Mexico’s war on drugs … surely you know that nothing will happen, but who wants to be the one in a thousand who it happens to.”

The fact that Costa Rica is only four hours from Atlanta also makes it a more appealing destination than other popular sites for this type of tourism, such as northeastern Europe, Cambodia and Thailand.

Jacobo Schifter says that, besides money and travel time, there are racist patterns in tastes of Americans and Europeans who come to the country. Matt reveals that, for him, all women in Costa Rica “are a ten.” “Well, almost all, but I have to admit that I am biased towards Latinas”.

In his study, Schifter says that most sex tourists coming to the country are between 40 and 60 years of age, and are from the Midwest or Southern U.S. They are mainly white men from middle or upper middle class. The research was based on internet forums that exist on sex tourists in Costa Rica, which conduct surveys among participants.

A young Colombian, Dominican or Tica, taken from the waist by an American over 50 years old, is a common scene on the sidewalks near the Morazan park in San José. The picture might suggest that there is a full opening to sex tourism, but the secrecy persists. The use of pseudonyms in this report is proof of that.

Matt, for example, told his friends he comes to Costa Rica for the “night life” but did not elaborate. Bob says that for most of his countrymen, there is the use of the phrase that is much applied to Las Vegas, “what happens in Costa Rica stays in Costa Rica.” Similarly, testimony collected by Schifter said: “We personally do not consider that what we do is something undesirable or discreditable. Nevertheless, I bet most of us would not feature our hobby to the public”.

TODAY NICARAGUA – Nicaragua, on Tuesday, March 2,  began to apply the Russian Sputnik V vaccine against covid-19 to people with chronic diseases, in...
Economy

QCOSTARICA - The International Monetary Fund (IMF) finally said yes to the loan for almost US$1.78 billion and to the fiscal adjustment commitment proposed...
Expat Focus

QCOSTARICA - Due to an improvement in the epidemiological situation of the health emergency, starting March 1, the only daytime vehicular restrictions for the...
Economy

QCOSTARICA - Costa Rica's banana growers reached an export record in 2020, despite the impact of the pandemic, shipping fruit in new markets and...
Travel

QCOSTARICA - Need to leave the country and require a test to detect SARS-CoV-2, the coronavirus that causes covid-19? The Cámara Costarricense de la Salud...
National

QCOSTARICA - Costa Rica will extend the restrictions of its land borders until April 1, confirmed Casa Presidencial (Government House) on Thursday. As in the...
Fuel Prices

QCOSTARICA - At 12:01 am this Wednesday, fuels will be more expensive, as the third price hike of the year takes effect. The increase in...
National

QCOSTARICA - For their preparedness to face tsunamis, the communities of Tamarindo and Sámara were recognized by the Junta Nacional Tsunami Ready de Costa...