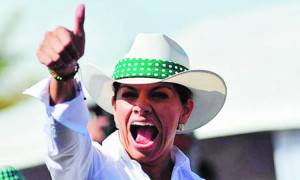 How much does it cost to maintain an image? Well, if you are the president of Costa Rica, on average about ¢3.5 million colones (US$7.000 dollars) per month.

In the last five months the government has spent ¢17.500 million colones in a communication strategy on social networks to improve the image of Presidenta Laura Chinchilla.

The money was paid to LGC Softcolsulting S.A, the payments starting in July, the start of the consulting contract. Still to spend is another ¢11 million colones, about three months worth.

But since there is a ban on such promotions during the presidential elections, Communications Minister Carlos Roverssi said the image shoring will resume after February 2,  running to May when the Presidenta leaves office.

The funds, according to Minister Roverssi, comes from a donation of US$475 million dollars made by the Banco Centroamericano de Integración Económica (BCIE) to the country.