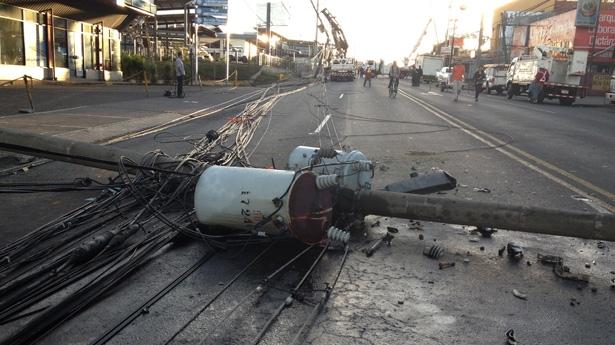 The Policia de Tránsito (traffic police) know full well who the driver is of the vehicle that took down nine electrical posts in La Uruca New Year’s morning, causing some ¢50 million colones of damage. But, they do not know where he is.

Apparently when the traffic police showed at the hospital to interview the driver he had fled.

It appears, the driver who was taken to hospital with minor injuries checked himself out minutes before police arrived. The disappearance means authorities cannot confirm if the driver was under the influence or not.

The driver now has ten (10) days to present himself to receive the traffic ticket and take responsibility for the property damage.

Since the accident caused only property damage and there is no confirmation of alcohol abuse, it is a simple traffic accident and no criminal charges can be laid.

In addition, Costa Rica’s traffic laws do not stop anyone from leaving the scene of an accident, that is this and other drivers cannot be charged for failing to remain at the scene (the hospital in this particular case).

The matter of the cost of the damage will now be a civil matter between the person responsible and Compañía Nacional de Fuerza y Luz (CNFL), a division of ICE.

For the time being traffic authorities are suspecting speeding that led to the driver losing control of the vehicle as the cause of the accident.