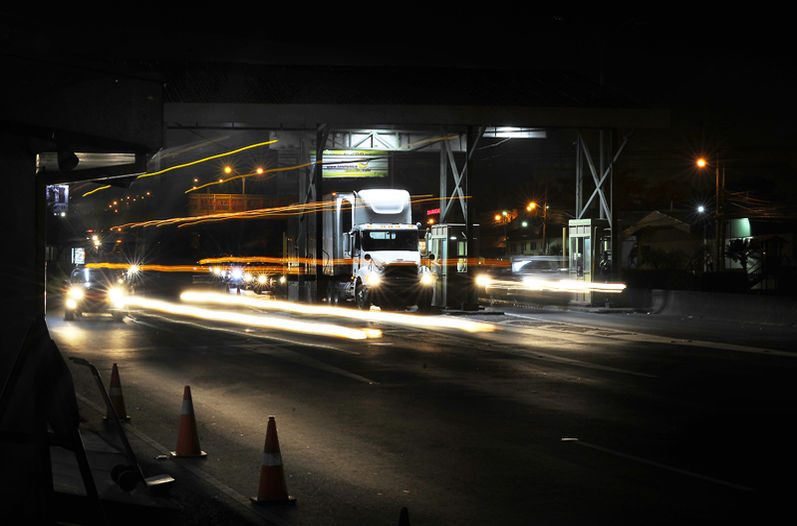 QCOSTARICA – Although the majority of drivers stop to pay the ¢75 colones (US$0.14) toll, there are a number who decide not to, speeding through the Alajuela tolls on the autopista General Cañas, endangering their lives, that of their passengers, the toll booth operators and other drivers.

On Friday, October 20, a 27 year-ol driver, as we learned later an habitual skipper of the tolls, traded his life for ¢75, when he slammed into the concrete abutment and destroying one of the toll booths. Fortunately no one else was injured in the dare.

In the report by the Spanish language daily, La Nacion, racing through the tolls at night is a common occurrence. Vehicles can be seen speeding up as they approach the tolls, race through between the toll booths, all to avoid paying the ¢75.

At the Alajuela tolls, as at the other tolls operated by the Ministerio de Obras Publicas y Transportes (MOPT), there is no barrier.

It was 10:57pm Thursday when a team from La Nacion arrived at the Alajuela tolls for a first hand witness. Nothing. The team was told by employees that it wasn’t until after midnight that drivers made their dash.

“They were right”, writes Katherine Chaves, when shortly after midnight and 2:00am Friday, the newspaper’s team witnessed a number of drivers race through the tolls, some even shouting “adios!” (see ya!) or “salados!” (tough luck!).

“This time these drivers managed to win their feat. We’ll see tomorrow if they have the same luck,” said one of the toll booth workers, who declined to give his name.

In the two hours, five cars passed through the narrow toll booth lanes at high speed, a small number to what happens in the early hours of Saturdays and Sundays, according to Allan Castro, head of the toll booth collectors.

“On weekdays the numbers vary, it depends if it is payday or there is a futbol (soccer) game. On Fridays and Saturdays, our employees must be wary of what happens because of the risk of an accident,” said Castro.

Castro adds that not having a barrier drivers have no fear of damaging their vehicle, feeling they have the right to evade payment. “They think they have nothing to lose by trying,” says Castro, who adds he doesn’t understand these drivers are threatening the lives of many.

What can be done?

Unfortunately not much. The situation concerns the toll collects and ask for a greater police presence.

However, Sonia Monge, deputy director of the Policia de Transito (traffic police) said this is not possible to due to resources.

Monge explained that about the only thing they can do is spot checks near the toll booths, stop cars to ask drivers for proof of payment, and if they have not, write-up the ¢23.000 colones fine.

The press office of the Ministerio de Seguridad Publica (Security Ministry) says, that although the toll operators are asking for help from the police, this is a matter only of the traffic police.