(QCOSTARICA) A Dutch woman and an Australian man did not know each other, but fate brought them together to share a journey on their vacations in Costa Rica, an adventure that cost them their lives in the mountains of Talamanca.

Kertin Dennisse Goedbloed, 33, a Dutch psychiatrist, arrived in Costa Rica on July 7, 1999, on a KLM flight from the Netherlands. She traveled alone, her intention was to stay for 22 days.

The Australian, Andrew Murray Scott, a surfer, had arrived in the country days earlier, on July 2. He arrived by land from Nicaragua.

The two shared a love for nature and adventure, so they became friends and decided to get to know the Talamanca jungle together, which had been one of Kirten’s plans, since she had a great passion for indigenous peoples, especially for the religion and medicine they practice.

She did not return

Kirten’s last contact with her family was on July 15. The days began to pass and on August 5, the day she was to have returned home, her family decided to alert the judicial authorities, to try to see what had happened to Kertin, unaware of her closeness to Andrew.

One of the first clues that started the search in Talamanca was that the psychiatrist rented a room from an indigenous woman and left some of her belongings.

On July 23, the two tourists arrived in Talamanca and entered through Suretka to the trails. Shortly before, they bought eggs, coffee, sweet corn and rice from an indigenous woman from a settlement.

The search expert and current deputy head of the Red Cross Mountain Unit, José Campos, was one to take part in the search. 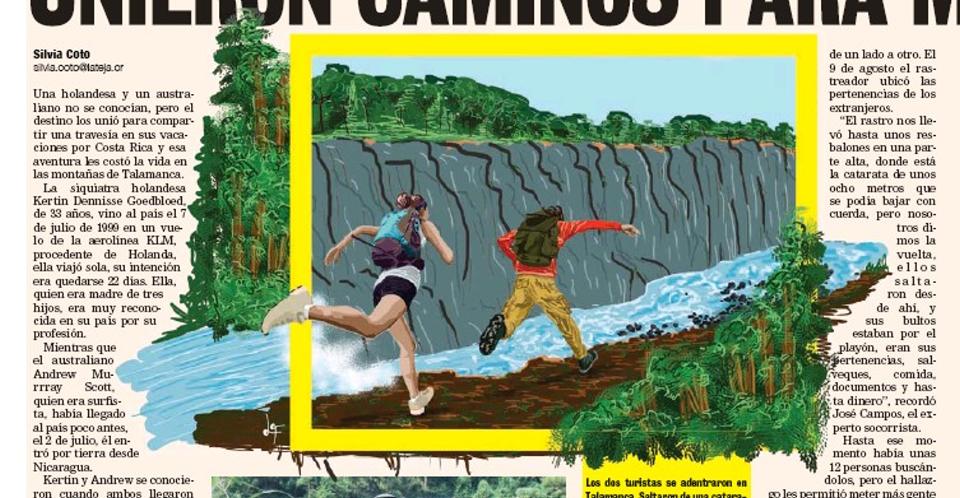 “They came to Bribri together, I never understood why they went to that place, I can’t explain what they wanted to do there, it’s a place where you have to be into mountaineering to want to go, there are beautiful rivers, but there aren’t any specific things to go see. San José Cabécar is pure mountain, it is a paradise in terms of mountains,” said Campos.

The rescuer assures that they knew that the two foreigners entered the mountain because the indigenous people saw them. Campos explained that this was a dangerous place due to drug and arms trafficking, so police officers were also part of the search.

“They walked along a path where two horses can pass and in summer a quad bike, where they went, you don’t need a compass or a machete, but suddenly they turned to the right through a canyon where you had to use a machete to clear the way,” said.

Those who know about mountains use the term tracker, which is the person who is ahead, who does not carry equipment but has to be with eyes wide open to see leaves, branches, footprints in the mud that indicate that people passed through there.

The indigenous people saw them pass through an area, so for several hours the rescuers walked from one side to the other.

On August 9, the tracker located the Kirten’s belongings.

“The trail took us to some slopes in a high part where there is a waterfall of about eight meters that could be descended with a rope, but we turned around, they jumped from there, belongings, backpacks, food, documents and even money, left there,” Campos recalled.

Until that moment, there were about 12 people looking for them, but the discovery allowed for more people to join, the number of brave people doubled.

“The area where we started looking is about half the size of La Sabana (metropolitan park). I think we spent about three days there, many years have passed, we combed that entire area and when we were still looking when the wind rose through the Coen river canyon, it was a gust of wind and we got that smell of rotten flesh, the wind came from the bottom up, so we started looking down,” Campos said.

The expert commented that they located  Kertin’s body about three kilometers from where they found the backpacks.

“She was sitting on a stone, out of the river, a meter and a half from the water, she was dead, she had immobilized one of her legs, her ankle, with the aluminum rods of a backpack, we believe that we lost their trace because they followed the journey down the river current and that is as far as she got,” José described.

Campos remembers the finding because it was Mother’s Day and he was finally able to speak with his mother, after many days without contact.

“The OIJ agents did not go down to where the body was, but had several photos taken and gave permission to remove it, we moved several stones so that the helicopter could come down and take the body,” Campos said.

The Ministry of Public Security journalist and photographer, Humberto Ballestero, recalls what happened. He worked as a photographer and he had to go to the area because several officers were involved in the operation and Air Surveillance also participated.

“There was only one helicopter at that time, I remember that there were several overflights, I had to take photos of where the body appeared, she was sitting on some stones, at that time there were not so many resources like now, the body was removed on a makeshift stretcher and transferred in the helicopter,” said Ballestero.

He assures that it was very hard for everyone when Kertin’s body arrived at the Bribri square and her father and brother, who had been waiting for days of the news, asked to be left alone with the body for a few minutes.

“They cried and hugged, I think maybe they were saying a prayer, then the father was very grateful to everyone because they always hoped that she would be found,” recalled the photographer.

The rescue teams were recalled from the area because near they did not find Andrew’s remains near Kertin’s body, and at the time a version had Andrew continue on his way and crossing the border into Panama.

“Upon re-entry to the area, we found a pair of pants that belonged to the man, we doubted that he had drowned, he was a young man under 30 years old, a surfer and in (physical) good condition, the search was suspended for the amount of time that had passed,” Campos said.

There were versions at that time that suggested that the two tourists got off the trail escaping from something or someone. An autopsy on Kertin’s body was performed to determine if she was murdered.

The autopsy indicated that an infection due to an ankle fracture and starvation took her life. There no indications of violent trauma, the body was very decomposed so it was not possible to determine when she died.

The remains of the mother of three children were taken to Holland.

On January 11, 2000, some indigenous found remains of the Australian man some 800 meters from where Kertin was found. In his case, the causes of his death were not determined due to the advanced state of decomposition of the remains.

La Teja tried to contact Sven Goedbloed, brother of the Dutch woman, through social networks, but there was no response.

In 2014 he gave statements to the Dutch news media, in which he assured that many times they had the hope of finding his younger sister alive.

“We had no illusions back then. Sure, we had hope, but we said to each other, ‘She is probably dead, but we will find her for her children, for ourselves.’

“Up to two years after her death, I discussed with my father the scenarios of what could have happened. Then we stopped. We are glad that we found her and that we were able to participate in the search. That also helped a lot to accept her death,” he added.

The statements were made by Sven after deciding to contact the families of two Dutch women who disappeared in Panama to share his experience with his sister.

The young women were named Lisanne Froon and Kris Kremers. They were lost in April 2014 and their remains appeared months later in Boquete, Chiriquí province of Panama, on the border with Costa Rica, in an advanced state of decomposition, the causes of death are not yet clear, it was said that it was accidental and that it could even be murder.

“When the two Dutch girls (Lisanne and Kris) disappeared, the Panama Red Cross asked the Costa Rican Red Cross for help, because Kertin’s family had told them about the work we did in the case and, curiously, I had to go. We didn’t find them,” said the rescuer.

Campos assures that they feel a lot of emotion when they find people alive in this type of search, but when they find the remains they also feel the peace the able to give to those close to them and the tranquility of knowing what happened.

“Three years ago (in 2011) I returned to travel the route through the (Talamanca) jungle, with my sister’s three children and a guide. ‘When I saw the place where she got on the banana boat to go to the jungle, I understood it. It was so incredibly beautiful,” Sven told Dutch news.

Mountain experts assure that it is best not to go on trails in these times of pandemic, since authorities are busy attending to the national and seasonal emergency, but if you still decide to go, the recommendations are: make a tour plan, this includes the point where going in and out.

In addition, the hours or days you plan to go, the most important thing is to notify a family member or friend and share all this information, so that if you do not return, they will notify the authorities, but also with a precise place to look for you.

If you are lost or injured and cannot walk, stay in one place. Bring a whistle, water, a spotlight, or headlamp, hopefully with flashing light (these can be seen from a helicopter).

Also, a first-aid kit, enough food, because people always believe that they come in and go out. Bring light and energetic food like granola bars, chocolates in addition to a blanket or thermal sheet, this will serve as a shelter from the rain and will keep you warm and the weigh nothing.

Learn to use your cell phone so that you can keep GPS active, there are also applications that give you the coordinates, if your phone has a signal you can share that.

If you plan to go to difficult places, seek a guide, advises the Mountain Unit of the Costa Rican Red Cross.

Translated and adapted by the Q from La Teja. Click here for the original (in Spanish).