The coins will continue to function as a means of payment

We all have them, worth almost nothing, but still can be useful. They are the little button-sized ¢5 coins that fill up your pockets or coin jar, that the Banco Central (Central Bank) will stop minting starting January 1, 2020. 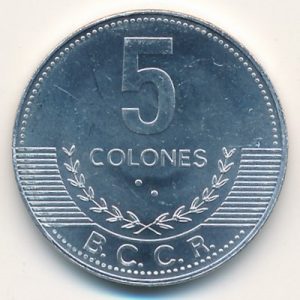 The Central Bank estimates there are 715 million of the coins in circulation.

The decision to stop minting, though the coins will continue to function as a means of payment, was based on several factors, including the cost of manufacturing, its low use and low recirculation, and the operating costs that coins mean for the sectors of the economy.

The Central Bank says it costs ¢7.10 to mint one ¢5 coin. This, despite the fact that since 2004 the coin is produced in aluminum, the cheapest metal offered by the worldwide manufacturing industry.

Even if they were inexpensive, the Central Bank said that the operation and logistics associated with the ¢5 is very expensive for the country

QCOSTARICA - The last time we saw the dollar exchange below...
Read more

The small Central American country of Costa Rica is known to be one of the top locations to retire, but it is also known...
Reports

QCOSTARICA - Costa Rican President Carlos Alvarado is just another citizen when it comes to covid-19 vaccination, given his young age and good health,...
Expat Focus