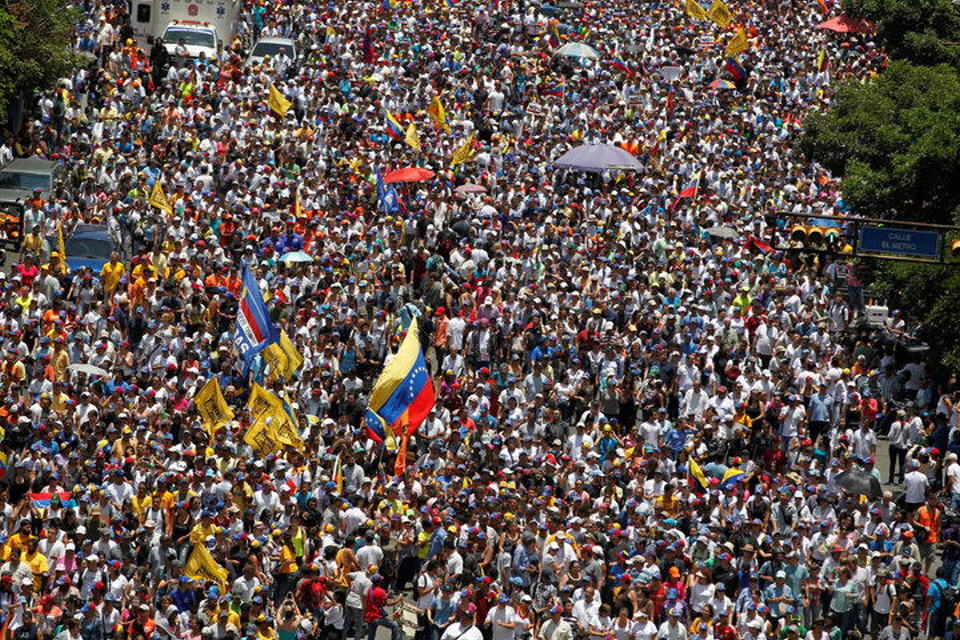 TODAY VENEZUELA – Days of angry protests in Venezuela came to a head over the weekend, when tens of thousands of people took to the streets to demand the departure of the country’s unpopular president, Nicolas Maduro.

Rallies went out in cities across the country on Saturday, the largest of them in the capital, Caracas. Protesters in the capital chanted “Liberty, Liberty” and carried signs saying “Dictator Maduro!” and “Elections Now!”

While protesters say Saturday’s demonstration in Caracas started peacefully, the day ended in fierce clashes between demonstrators and security forces. Officers in riot gear used tear gas and water cannons to prevent marchers from proceeding. Some protesters threw rocks and petrol bombs and lit garbage on fire. Around a hundred protesters broke into an office of the Supreme Court.

Opposition activists say dozens of people were detained on Saturday.

Saturday’s protests came after ten days of intense unrest, sparked by the Supreme Court’s decision last month to strip the country’s Parliament from most of its powers.

On March 29, Venezuela’s highest court ruled that it would take over the legislative powers of the National Assembly, the country’s opposition-controlled Congress.

The move by the Supreme Court, which was stacked with Maduro-allies during the last session of the National Assembly before it fell in opposition hands, sparked fierce condemnation from activists, international powers and even supporters of President Maduro.

While the court eventually reversed the ruling amid growing pressure, the decision galvanized the opposition and set off tense protests throughout the following week.

The unrest claimed its first victim on Thursday, when a police officer shot a law student dead on the outskirts of Caracas. Opposition leaders said 19-year-old Jairo Ortiz was killed as authorities tried to break up a protest. The Interior Ministry confirmed Oritz’ death and vowed it would charge the police officer who shot him, but disputed claims that Ortiz was a protester.

Demonstrators were angered anew on Friday, when the national comptroller’s offices announced opposition leader Henrique Capriles would be barred from holding office for 15 years.

While the government accused Capriles, a two-time presidential candidate who narrowly lost the election to Maduro in 2013, of breaking contracting laws and improper management of donations, the opposition says the move is intended to crack down on the opposition ahead of new elections in 2018.

“When the dictatorship squeals it’s a sign we’re advancing,” Capriles said in a speech on Friday. “The only one who is disqualified here is you, Nicolas Maduro.”

Discontent with Maduro’s policies is at an all-time high as Venezuela battles a dramatic economic and humanitarian crisis.

Falling oil prices and economic mismanagement brought about a recession that the IMF predicts will last until at least 2019. As the economy shrank, Venezuela faced growing poverty and crippling shortages.

Today, unemployment is up and wages have declined dramatically. Stores across the country lack basic food products. Hospitals go without medicines and essential medical equipment.

As opposition intensified, Maduro has stepped up the crackdown on dissent. More then a hundred political prisoners are currently behind bars, the New York Times reported recently, up from 89 a year ago. “The level of repression has risen to a brutal level,” Alfredo Romero, who heads Penal Forum, a human rights organization that tracks political arrests, told the newspaper.

For now, there’s no end in sight to the protests. Demonstrators are expected to rally again on Monday and a large rally is planned for Wednesday, April 19.

“It’s been two years since I’ve been out on the streets,” Richard Morton, a 43-year-old electrical engineer told Reuters. “I’m out today because I see people acting in solidarity and the lawmakers are backing us up more. Plus the economic situation is insufferable. No one can live here.”