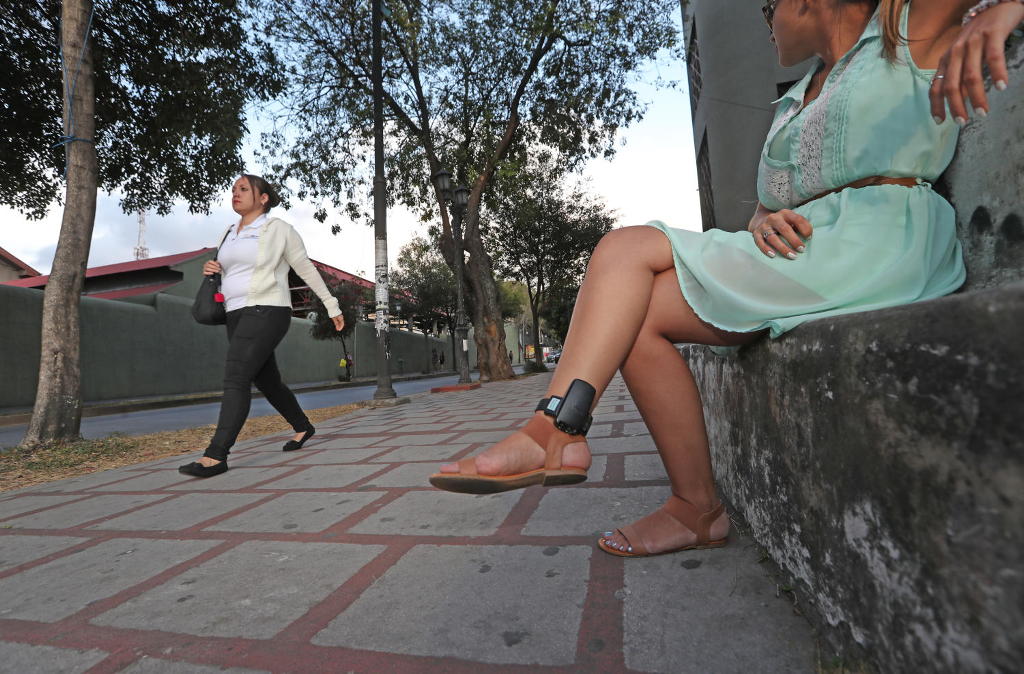 Q COSTA RICA – It started a month ago, with the first eight inmates, the project of outfitting convicts with electronic ankle bracelets (tobilleras electrónicas in Spanish) now is up to 100 inmates (11 of which are women), who are being monitored around the clock by 16 prison police officials, working out of monitoring centre, located in downtown San Jose.

A report by La Nacion says, of the 86 inmates of which information is available, 45 were convicted for aggravated robbery and 15 for the sale of drugs. The others for smuggling, theft and bribery among others; the majority where between 18 and 30 years of age; and one, a 71-year-old woman.

According to the Ministry of Justice figures, so far, seven convicts had “by accident”damaged their monitoring device.

But how effective is the device and the monitoring?

La Nacion reporter Katherine Chaves set out to find out, taking to wearing the ankle bracelet for a total of 92 hours (last week) while moving about in downtown San Jose and Alajuela.

But, before she set out with her monitoring device, Delago did some explaining of the system. “Altough there has been a coordinated effort between the Justice Ministry and Fuerza Publica, including training of officials in the streets, there are lapses in the system,” said the official.

For example, explains Delgado, if an inmate is outfitted with the device on a Monday, it won’t be until the following day that he/she begins to be monitored by the system.

“The person (inmate), when he arrives, we put on the device and we send him home. We have an address that is not exact. Therefore,we follow them and when they arrive (home), they become included in the monitoring,” Delgado explained.

If an alert is reeived, the prison police activate a protocol. The first step is to send the device a vibrating alert, followed up by a phone call, followed up with a call to family and friends, and if no response is obtained, then a call to the police.

It will then be up to a judge to determine the reason for the alert and if the failed response is valid, such as an emergency visit to a hospital. If the fail is serious, the judge can revoke the benefit (send the convict back to prison) or issue a warning.

A dead battery results in an alert. The same if the convict somehow removes the device.

“In our experience so far, they (the inmates) have called us or tried to call us to justify themselves,” said Delgado. Nevertheless, a judge is notified and who will decide if action is warranted, explained the official.

She writes that in the 92 hours she wore the device it sent an alert on a couple of occasions, once when in Escazu and the other in La Sabana.

However, it did not when she visited several parks in Alajuela (outside the authorized area).

Delgado explained that they have been in contact with the Empresa de Servicios Públicos de Heredia (ESPH), the Heredia utility that has the contract for the project.

During the test, the reporter said she was followed by a pair of municipal police officials in Alajuela centre. They did not approach her; they just kept their eyes on her. Their attitude made her presence even more noticeable to passers-by, who seemed to react with fear.

Delgado explained that the Fuerza Publica has been trained so that they know how to react in the presence of an inmate with an ankle bracelet.

“The inmates are seen as normal citizens with a particular legal status. Just because you walk around with an ankle bracelet does not mean you a threat to society,” said Delgado.

The official stressed that before a convict enters the program he or she is vetted by a judge, who verifies that their sentence is not more than six years, and that they have not committed as serious crime(s).

Delgado added that, since the device does not emit a sound (only vibrates) during an alert, the police can verify if the person is being  actively monitored by calling a special lien 800-ENLACEM. The number is monitored 24 hours a day.

- Advertisement -
Paying the bills
Previous article4 Municapalities To Apply ‘Dry Law’ at Easter
Next articleCienaguita: A Town Fears That the Sea Will Steal Its Shiny New Face

Canadian Deported Back To Costa Rica After Fleeing To Nicaragua

A Canadian man identified as Jonathan Gallota, 35, who destroyed his...
Read more