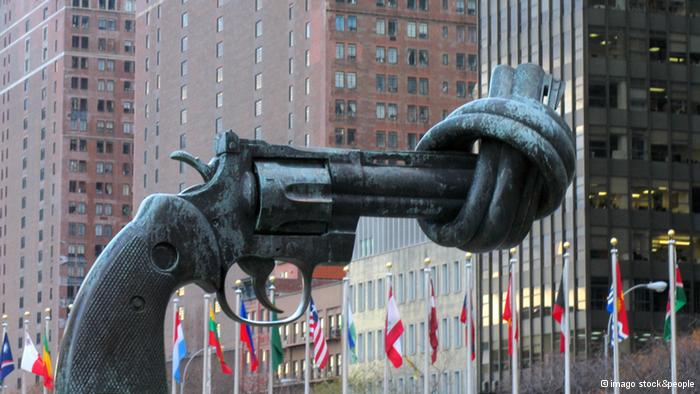 However only six countries (Costa Rica, Guyana, Nigeria, Iceland, Antigua and Barbados) have ratified the pact. In all, some 50 countries have to ratify the treaty (by vote of each nation’s parliaments or congresses) for it to become binding.

This process can take years. The ATT tightens restrictions on sale and purchase of conventional weapons. Many arms producing countries in Europe as well as Russia and the United States are not expected to sign the pact nor will there be ratification of their elected representatives.

Right now, unless some momentous sea change occurs, too much is at stake in the multi-billion dollar business of arms manufacturing to allow countries to take the economic and political hit involved with voluntarily lowering income and employment.

Still, in making his announcement at a press conference, Castillo was flanked by Austrailian Foreign Minister Julie Bishop and the foreign ministers of the United Kingdom and Finland, showing great respect for what Costa Rica’s UN delegation is attempting to do.

The only countries to openly oppose ATT have been (so far) North Korea, Syria and Iran. President Chinchilla personally deposited a signed copy of the treaty with the UN Secretary General Wednesday before participating in a forum on ATT in the afternoon.

Australian Foreign Minister Bishop made a point of mentioning in the press conference the absence of Kenya’s president due to the terrorist attack in his country — carried out with conventional weapons against men, women and children and leaving more than 70 dead.

Comment: There is a time limit on the signing and ratification of the treaty if it is to go into effect. Undoubtedly many more small countries will sign the treaty and a lesser number of chief executives will manage to push through ratification, although it may not be enough.

Certainly Costa Rica’s UN ambassador, Educardo Ulibarri, a former journalist, is enough of a realist to know that the ATT is a gesture and a symbol. Still, he is also enough of a visionary to realize that Costa Rica is one of the few countries in the UN to give more than lip service to world peace and it has to begin somewhere.