More than half of traffic tickets are appealed says the Consejo de Seguridad Vial (Cosevi), confirming that it has some 160.000 tickets currently in appeal and with only a staff of 40 to process them. 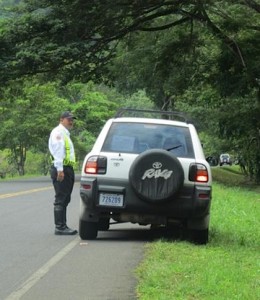 The Cosevi introduced the appeal system in December 2008 and to date 54% of all traffic tickets have been appealed, as drivers faced with fines in the hundreds of dollars use the system to either get off completely or at very least stall the time to pay

Silvia Bolaños, director of the Cosevi, admits that there is a serious problem in the system.

By numbers alone, each of the 40 lawyers working with the Cosevi have to resolve 4.000 appeals each to erase the backlog.

When submitting an appeal at the Cosevi offices in La Uruca, you are told to expect a resolution within six months. In reality, however, the resolution of a case can be up to 2 years or more.

In the meantime, the driver (or the owner of the vehicle before the latest decision of the Constitutional Court) had plenty of time to pay up if found guilty.

Bolaños calls the appeal process a “loophole”. “We are continuing to strengthen the loophole that encourages irresponsibility of Costa Ricans faced with having to pay a traffic infraction”, Bolaños told La Nacion.

The situation goes further than just avoiding paying a traffic fine. Bolaños explains that, when a driver’s vehicle or license plates are confiscated for such as driving impaired, if the ticket is appealed, the vehicle or plate has to be released during the appeal process.

Appealing a traffic ticket is the cause of many other problems, according to the director. Without the ability of collecting on traffic fines, or at least in a timely manner, traffic lights continue working damages, streets do not get the repair attention they need or the ability of the Cosevi to paint lines,  for example, the director admits.

Appealing a traffic ticket in Costa Rica is unlike that of the United States, Canada and many other countries, in that the driver files an appeal – filling out a form that includes a statement of what occurred – and then waits, waits, waits, waits…waits for a decision.

No hearing is scheduled. A driver is not afforded the ability to present his or her case before a traffic court or judge. The appeal is decided on and the decision is rendered.

If absolved, the traffic ticket there is no requirement to pay the traffic ticket. The ticket still remains a matter of record, with the notation that it was absolved. To the contrary, the ticket becomes fully payable and interest and late fees and penalties apply if not paid within the established time.

QCOSTARICA - Characteristic of the rainy season, we will see rain in the afternoons and nights in the Central Valley, the entire Pacific coast,...
Business