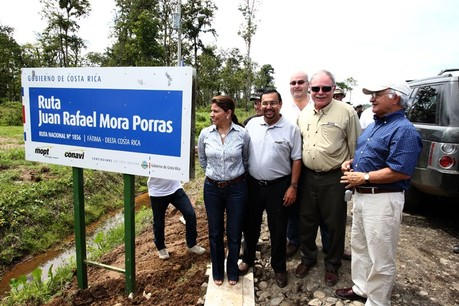 The Ministro de la Presidencia (Presidency Minister) Carlos Ricardo Benavides Tuesday lay the blame for decisions on construction of the Trocha (Route 1856 or border road) directly in the lap of President Laura Chinchilla.

The testimony was in reply to allegations that the decisions surrounding the debacle of the road construction in the north of the country were made by advisers to the President.

The unicameral legislature’s government spending committee has been investigating the hapless construction for more than a year during which the lawmakers have turned up much finger pointing at others for making serious mistakes. (See previous articles.)

The committee has managed to implicate everyone in the Administration from Vice President Luis Liberman to the National Emergency Committee on down while coming up with more questions than answers.

Benavides told the committee emphatically that that the final decision were the President’s, made with the expert advice of then-minister of Public Works Francisco Jimenez.

The road was begun to provide a land link between border communities on the south bank of the San Juan River so residents would not have to use the river (Nicaraguan territory) to get to the rest of the country.

The decision was taken in haste in 2010 after Nicaraguan troops invaded Costa Rica’s Calero Island. (See previous articles.) Construction began without an environmental impact study and, indeed, even a paper plan.

Private construction companies were contracted willy-nilly and the courts are still investigating the corrupt practices involved, which implicate the highway construction agency Conavi, MOPT, Emergency Committee and a host of private contracters.

The national newspaper La Nacion observed that Deputy Walter Cespedes of the Social Christian Unity party, a vocal critic of the government’s action, was less aggressive than usual in questioning Benavides.

This may be because he himsef is under scrutiny for having petitioned Benavides to influence the Education Ministry to give two of his nieces jobs. Or, it may be because he did not want to get on the bad side (caer mal) of the powerful minister.

Comment: The committee has spent many hours investigating this fiasco. But, they had plenty of time. There was enough blame in the Administration during 2010-11 to go around — no one needs to fear being short-changed in that regard.

Still, the public may be growing tired of the whole mess. It may be time to get some lawmaking work done.