Seven cantons raised to orange alert this week. The previous week it reached a new record contagion of 14,514 people and 132 deaths. 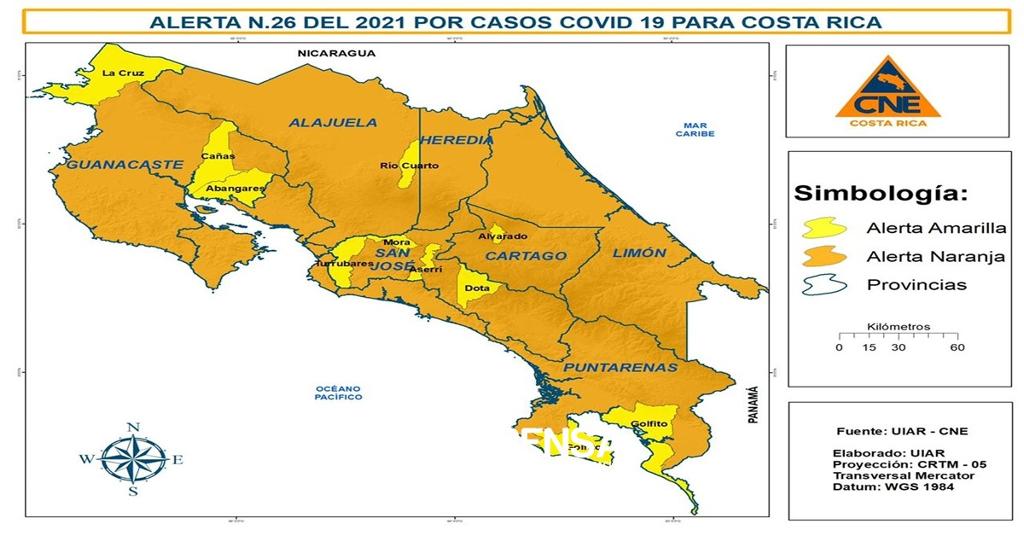 QCOSTARICA – The National Commission for Risk Prevention and Emergency Attention (CNE) has increased alerts for another 7 cantons, bringing the total to 72 of the 82 cantons in the country on orange alert for COVID-19.

This is the largest number of cantons on orange alert since the pandemic began in March 2020.

According to the National Situation Analysis Room, the seven cantons that increased their level of risk this week are Corredores, Hojancha, Nicoya, San Mateo, Sarapiquí, Tilarán and Upala.

For the cantons of San Mateo in Alajuela and Tilarán in Guanacaste, it is the first time on orange alert in the more than 14 months of the pandemic.

The areas that concentrated the majority of the cases in the previous week are: the central cantons of Alajuela, San José, and Cartago.

Among the most important epidemiological data of the last week, the CNE highlighted that, in addition to reaching the highest peak of infections so far, there was also the highest number of deaths associated with covid in a week with 132.

“We are in a critical phase of the emergency due to the acceleration that the virus has had in the last 4 weeks, the response institutions and the Municipal Emergency Committees are making great efforts to counteract the impact of the pandemic, but the discipline and awareness of people, who are the first to prevent COVID-19 in their own homes,” explained Sigifredo Pérez, director of Risk Management of the National Commission for Risk Prevention and Emergency Attention (CNE), during Tuesday’s press conference at Casa Presidencial.

Turrubares is the only canton that has remained on a yellow alert throughout the health emergency.

- Advertisement -
Paying the bills
Previous articleTravel agencies estimate 10,000 Costa Ricans who will travel to the United Stares to be vaccinated
Next articleNew restrictions outrage hospital staff while business applauds “balance”