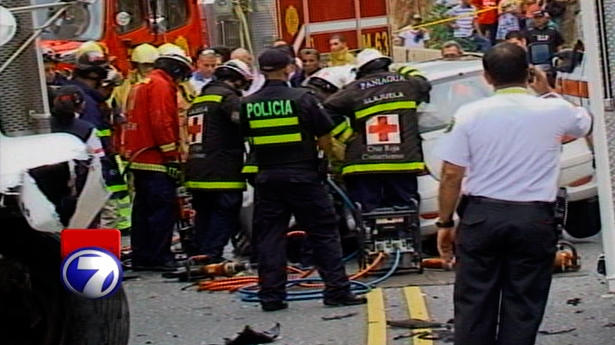 The Cruz Roja (Red Cross) released on Monday that 16 people died violently this past weekend, with traffic accidents the leading cause.

In the 48 hours between Saturday and Sunday, four people became victims of being hit by a vehicle, while six others involved in a collision between vehicles.

According to Jim Batres, assistant director of operations at the Cruz Roja, it had been a quiet month until this weekend. Batres points to this weekend being a pay weekend and many were out taking in the summer conditions as a major factor in the number of deaths.

The recommendations to not become a statistic are to respect the rules of traffic, don’t drink and driver, keep your vehicle in a good state of repair and avoid driving for long periods, especially at night. These recommendations are basic but they could be the difference between getting home safely or not.

So far this month (to Sunday) there have been 58 violent deaths. Last February the month closed with 95.

QCOSTARICA - Five of the 82 cantons of Costa Rica register fewer than 10 active cases of covid-19 to this date, according to the...
National

QCOSTARICA - After almost three years of starting the work and four before that to the get contract awarded, authorities of the governments of...
Health

QCOSTARICA - A year into the pandemic, the government is throttling back on the press conferences to update the evolution of the pandemic. From the...
Immigration

UPDATED: The DGME confirmed that anyone entering the country on or after December 17, 2019, will be allowed to legally stay until June 1st,...
Expat Focus

QCOSTARICA - Before I get into my opinion of the irresponsible actions of the immigration service and the ICT, good news for tourists who...
Nicaragua

On November 7, Nicaraguans will go to the poll in elections lacking democratic guarantees, without minimum conditions to promote healthy competition for power. In...
Fuel Prices

QCOSTARICA - At 12:01 am this Wednesday, fuels will be more expensive, as the third price hike of the year takes effect. The increase in...
Guatemala

Q24N - Guatemala on Tuesday received 200,000 doses of the vaccine against covid-19 donated by India, which it will use to complete the immunization...