A Walk of Faith! 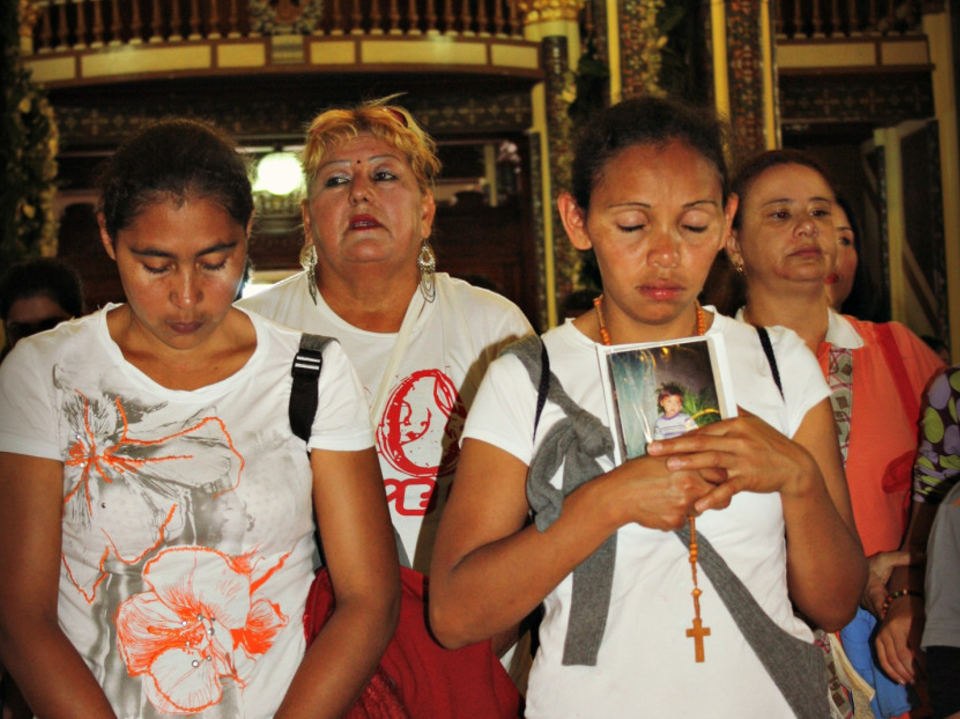 (qCOSTARICA) It starts around the middle of July, when many in Costa Rica start thinking about the “romeria”, the annualwalk to the Basilica de Los Angeles, in Cartago, to pay homage to the patron saint of Costa Rica.

Some do their walk early, beating the masses that converge on the city of Cartago on August 1 and 2. Whatever the reason, tradition or faith, the romeria touches everyone in the country in one way or another.

“A Walk of Faith to the Cartago Basilica” is the title to his great short story by a young blogger, writing on her “Fearless Expressioner” blog, about her “romeria” experience.

Here is a reprint. You can read the original at Fearlessexpressioner.com.

A Walk of Faith to the Cartago Basilica

Ouch, was all I could think as a pain surged from my knees up through my thighs. Like thousands of Ticos, I was crawling from the entrance of the Basílica de Nuestra Señora de los Ángeles in Cartago, Costa Rica, to the alter. I approximated that the journey was 100 yards total, and I myself had only inched my way a couple of feet. The sensation from compressing my knees on the hard pavement told me to give up, but I could not disrespect the holy place in such a manner. After all, I was surrounded by older people who had spent the entire morning walking to the basilica, and despite aches in their feet, still had the energy to finish the path. I, myself, had only taken the bus. Every time I stopped, I felt the lady dragging her baby in a stroller along with her run over my heels, urging me to move forward. Placing my agony aside, I progressed, remaining tranced in the atmosphere.

The legend is that a young indigenous girl found a rock statue shaped in the image of the Virgin Mary while out in the forest. She took it home and locked it up, only to find later that the statue had transported itself back to where she found it. This happened again. She consulted a priest who declared that the statue, called La Negrita because it’s dark color, was a miracle. The basilica was built in the place the statue was found, and today La Negrita sits on the alter.

Every year, millions of romeros make their way on foot to Cartago for Virgen de Los Angeles, a national holiday and national mass service on Aug. 2. It is estimated that in a two week period, two million people trekked their way this year. One gentleman told me it took him four hours to walk to the destination from San José. Intrigued by the dedication to this faith walk, I myself followed this event from start to finish.

I was overwhelmed by the pure devotion and emotion of the people. I began my journey watching the romeros as they came up the hill in downtown San José. The pilgrims were not what I was expecting. In my head I envisioned people with long robes and head dresses, but these people were more modern. They wore tights, tee-shirts and backpacks, and power walked up the sidewalk. As noon approached, the sun positioned itself high, and the temperature was one of the hottest I had felt in the city. However, nothing stopped

progression. I had the pleasure to converse with a lady named Johanna who was selling rosaries and ponchos to people as they walked by. It struck me that venders would seize every opportunity possible to sell merchandise. She told me that people would be walking all during the day and the night. She also informed me that she would start walking herself later that day. She had some sickness that she was going to pray about at the alter. I wished Johanna luck, and left for work. When I returned, she was gone.

What did greet me when I returned, was the rain. A mild downpour started just as the clock approached five. The traffic of walkers had doubled from the morning, and everyone put on their ponchos and continued going. I hid from the precipitation at a bus stop, and rode up to the next town. By this time the rain stopped, and I walked a few feet with the walkers, taking pictures. Everyone had high energy and some people even stopped and posed for me. The most amazing thing I saw, was a women who was going the whole way without shoes. This seems to be a common practice, as symbolism for the times of Jesus.

As the sky grew dark, I made my way back home, but the walkers continued progressing. The next morning, I rose and caught the bus to Cartago with my friend, Photojournalist Gabe Dinsmoor. Beside us was a women who was seven months pregnant, dressed in a beautiful dress and heels. Several times she cringed and held her stomach, as if she was going into labor. She didn’t let this deter her trip, and we arrived at the Basillica at the same time.

A gentleman lifts his hands, bows his head, closes his eyes and prays around the alter.

There were thousands of people gathered outside, waiting for the mass service to start. Outside resembled a carnival, with tons of people and many booths selling fast foods over a counter. I walked through the basilica the first time, then came and tried by knee. Around me people were overcome with the spirit of the place. I witnessed people crying, praying and falling to their knees. Some brought candles to light while others kneeled at the alter. Each one praying for strength, forgiveness and prosperity.

As they finished, they went to the back of the church to collect holy water. Legend is that there is a small stream located around the basilica that has curing powers. The water is pumped to the basilica, and people douse themselves and their children with it. Finally, they collect some in virgin mary shaped canisters to take home.

I did not get water to take home, but I left with a feeling of peace and joy that I will continue to carry each time I recall this memory. I can only pray that one day I will have enough conviction to take a pilgrimage, but until then I will keep admiring those that do.

- Advertisement -
Paying the bills
Previous articleIs The Holy Water in Cartago Safe To Drink?
Next articleWhy Is The Caja Always Broke?

QCOSTARICA - For today, Monday, September 13, despite being...
National