Despite the clear signals that President Donald Trump would drop the axe on a program that protects unauthorized immigrant young adults from deportation, the announcement by Attorney General Jeff Sessions provoked an immediate and passionate backlash from the 800,000 young immigrants who benefited from the program, as well as their supporters. 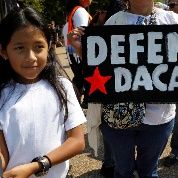 Across the United States, people were outraged as they heard the smirking attorney general – scarcely able to conceal his joy over the cancellation of the Deferred Action for Childhood Arrivals program, or DACA – announce that the revoking of qualifying migrant youths’ rights was the “compassionate thing to do.”

Thousands of students at high schools in Albuquerque, Denver and Tucson, among other cities, immediately walked out of their schools and took to the streets in reaction to the announcement. In Washington, D.C., protesters poured out in front of the Trump International Hotel and blocked streets in front of the White House to defend DACA and voice their outrage over the cancellation of the program. In Manhattan, New York, several were arrested after also blocking traffic in front of Trump Tower.

Democratic state attorneys general in California, New York, Washington and Massachusetts said they would sue to defend DACA, while Mexico, El Salvador, Honduras and Guatemala pledged to lobby U.S. lawmakers to protect the young adults whose lives have been thrown into limbo.

“Trump has posed the challenge to himself to surpass Obama-era deportations, and during the first months of his presidency it is the only promise that is moving forward as intended,” California-based group Union del Barrio said in a statement, citing the nearly 3 million undocumented migrants deported between 2008 and 2016 by the so-called “deporter-in-chief.”

“Logistically, (Trump’s) terrible goal was made possible thanks to Obama’s deportation machine,” the group added. “Furthermore, the elimination of DACA will be the bargaining chip for Trump to finance and build his apartheid border wall.”

Speaking to teleSUR, immigration attorney Nora Phillips said that the scrapping of the program left her feeling “physically ill.” In addition to helping to lead Tijuana-based legal services organization Al Otro Lado, Phillips is on the Executive Committee for the Immigration Law Section of the Los Angeles County Bar Association

“I have many family members and close friends with DACA and this is a horribly sad day,” Phillips said. “Arpaio gets pardoned and 800,000 people are having their livelihoods ripped away in less than a week … The amount of cruelty in this world is staggering.”

“I have seen lives change dramatically as a result of DACA,” Phillips added. DACA deferments allowed holders of the status to enroll in college, legally find employment, open bank accounts and obtain drivers’ licenses while living free of the fear of deportation

“I supervised the filing of several thousand DACA requests and would see clients through two or three renewals and saw a lot of people’s lives change for the better,” she continued. “DACA recipients were less subject to employer abuses and were able to have some sort of financial stability for the first time in their lives. Through advance parole, people were able to reconnect with family members after decades of separation. Kids weren’t as terrified that their mom or dad would be deported. ”

Anahi Quiroz was brought to the U.S. by her mother from Mexico as an undocumented child. Now a Cal State University Channel Islands graduate living in the suburbs of Southern California, her world changed when the 2012 executive order granted her the basic social rights that allowed her to legally work outside of the grey economy.

“Since I entered this country without inspection there is no current immigration law that could help me find a path to citizenship,” Quiroz told teleSUR. “For years I was stuck working at several restaurants who use undocumented immigrants to do the labor,” she added.

“For the last 14 years, I have dedicated my life to contribute to U.S. society by volunteering, paying taxes, being a good student, daughter, sister, neighbor and colleague,” she said, noting that she now works as a dispatcher in a nearby office park.

Quiroz will continue organizing to back the American Hope Act of 2017, a bill that would grant permanent legal status and eventual citizenship to DACA recipients and others. If she’s unable to legally work in the United States come March of next year, she hopes to use an electronic travel visa she acquired last year to re-establish her life in Canada.

While Sessions implied that DACA relief for young adults like Quiroz has yielded “terrible humanitarian consequences,” Trump claimed to have “a great heart for the folks we’re talking about, a great love for them.”

He later issued a written statement denouncing DACA an “amnesty-first approach” and pressed his nationalist “America First” message, saying that despite concerns voiced by his critics, “above all else, we must remember that young Americans have dreams too.”

Trump has given a gridlocked Congress to 6 months to address the situation by passing immigration legislation before March 5, 2018, when the federal government will begin phasing out DACA.

The reform proposal the White House has presented is the RAISE Act, promoted by Trump’s senior adviser Stephen Miller as a so-called “pro-American immigration reform.” The bill would slash legal immigration by 50 percent over 10 years, slashing family reunification visas and prioritizing English-speakers and high-skilled immigrants. A significant portion of DACA beneficiaries would likely not qualify for citizenship under the bill.

The RAISE Act mirrors demands pushed for years by “nativist” anti-immigration groups like the Federation for American Immigration Reform FAIR and NumbersUSA, which have been called “hate groups” by organizations like the Southern Poverty Law Center.

To longtime Washington-based community organizer Maru Mora Villalpando, an undocumented co-founder of NWDC Resistance who arrived in the United States in the early 1990s, Trump’s actions are just the latest salvo in “the declared war against immigrants this regime started last year on the campaign trial,” guided by cynical political calculations and a white supremacist agenda.

“It is clear this is a political move to continue dividing our communities by trying to engage young immigrants in the false narrative of ‘deserving,’ ‘well behaved,’ ‘economy contributors’ that do deserve to stay and at the same time push for a legislation that would fund vast immigration enforcement and the construction of a bigger wall in the southern border,” she told teleSUR.

“We fought for changes in immigration policy before DACA, we fought against detentions and deportations and put our bodies on the front-line to create change that would benefit all of our people, we will continue fighting,” Villalpando emphasized.

“With or without DACA, our communities will continue being targeted and scapegoated, therefore we won’t stop now and we won’t allow nativist, racist, xenophobic agendas to criminalize and divide our communities further.”

Despite the fact that COVID-19 is slowing down the...
Latin America