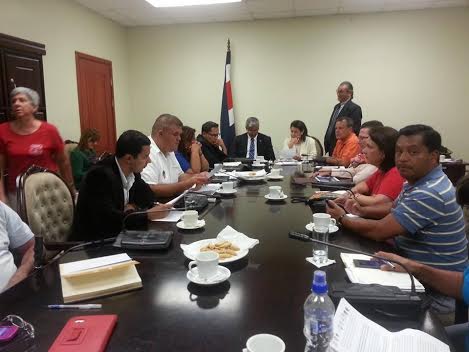 After eleven hours of talks, an agreement was reached between the labour unions and the Ministerio de Educación Pública (MEP), to end the 18 day old strike by teachers.

Monday night the government made two payments of back wages to some 7.000 teachers that had not been included in the Integra 2, the MEP’s payroll system.

Teachers and their unions had vowed Tuesday to continue the strike, not confident that problems with wages would be fully resolved despite a call by President Luis Guillermo Solís for teachers to return to the classroom or face possible sanctions. The President never explained what the sanctions might be.

During the negotiations, it was agreed that any teacher still facing problems with the salary payment could visit any of the 27 MEP regional officials and file a claim, and once approved by the Tesorería Nacional y de la Dirección de Recursos Humanos (National Treasury and the Department Human Resources), the teacher would get paid in process time of 24 hours

The important point is that teacher will not be required to sign any affidavit. Last week the majority of teachers had refused to file a (payment) complaint with the MEP for being required to sign documents – documents they feared would eliminate their rights to further claims or additional payments.

Another point of agreement is the creation of a joint commission comprised of representatives from both sides, to regulate the payment of teacher salaries and follow up on the resolution of the technical problems with the MEP payroll system to avoid future problems.

Agreed also is that there be no sanctions against teachers taking part in the strike and that the 2014 school calendar will not be modified, that is add extra classroom hours to make up for the time lost during the strike.

The agreement is to be presented to the teachers this morning (Wednesday), after which, union leaders will meet with MEP Ministry of Labour officials to sign the document and put an official end to the strike.

Catholic bishop, Archbishop José Rafael Quirós and Dr. Rodrigo Alberto Carazo Zeledon, former Ombudsperson, are expected to be witnesses to the signing, which will take place in the Edicio Rofas building on Paseo Colón.