An End to FARC’s ‘Revolutionary Tax’ 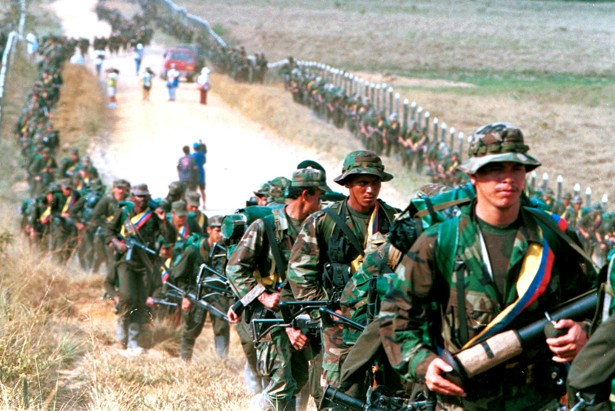 The Revolutionary Armed Forces of Colombia said the tax is no longer necessary in light of the upcoming peace deal with the Colombian government.

The leader of the Revolutionary Armed Forces of Colombia (FARC) ordered an end to its decades’-old “revolutionary tax” on local businesses in parts of Colombia under its control.Rodrigo “Timochenko” Londoño, the Marxist guerrilla group’s leader, said Monday the tax was no longer needed because of the upcoming peace agreement with the Colombian government.

“We hadn’t done this before not because of a lack of will but because we need to eat,” said Timochenko.

“We’re almost there and we believe that with what we have we will make it to the end,” the FARC chief added.

FARC was a political movement that later became a designated terrorist organization. To sustain itself, it long relied upon the extortion tax levied on businesses operating in areas it controls, as well as on kidnapping, illegal mining, and drug trafficking. FARC once counted 20,000 soldiers among its ranks. Its decades-long war with the government has killed more than 250,000 people, and displaced more than 6 million.

Last month Timochenko signed a cease-fire agreement with Colombian President Juan Manuel Santos in preparation of a peace treaty and full demobilization of the remaining 8,000 FARC soldiers. A peace deal is expected before the end of the month.