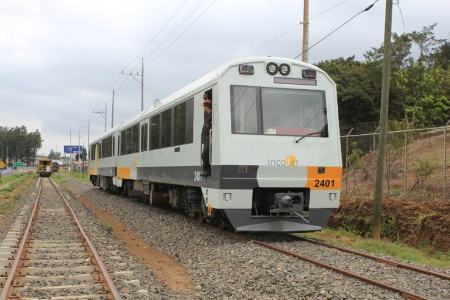 Costa Rica’s version of hydroelectric planning surfaced to public view Saturday when La Nacion revealed that ICE, the electricity monopoly, and the Costa Rican railway system (INCOFER) are at loggerheads over an historic stretch of abandoned track to be covered by ICE’s Reventazon Dam reservoir water in 2016.

The eight kilometre section of track on the bank of the river was built between Limon and Turrialba by railroad pioneer Minor Keith between 1879 and 1881. The track was abandoned when ex-President Jose Maria Figueres decided that railroads were a thing of the past and reduced INCOFER to a shadow.

The only other alternative is to construct a totally new line that would add two kilometers to the route but would bypass the area to be flooded by the reservoir, explained INCOFER spokesman Elberth Duran. This would require two tunnels and the purchase of dozens of lots from private persons for right of way.

But there’s no stopping the dam, envisioned to go on line the first quarter of 2016 and 44% now built. It will produce 305 megawatts of much needed power at a cost of $1.4 billion.

Carabaguiaz has a modest proposal: Let ICE pick up the tab for the right of way purchases and the tunnels. Neither ICE nor INCOFER know what that price tag would be but La Nacion gives a hint about railroad construction costs today — a kilometer of new track contains 1,600 ties at $100 per unit plus 240 sections of rails at $800 per ton.

Comment: We find it hard to comprehend why INCOFER did not understand that the Reventazon River would not be the same size as now when the reservoir fills. Nor can we fathom why ICE’s vaunted (and expensive) engineers would not realize that they should tell everyone behind the dam what is going to be flooded out.

As the grumpy father says to the kids on a car trip when they ask to stop, “Why didn’t you take care of that before we started?”