Are Colombians Spreading the Coca Curse to Honduras? 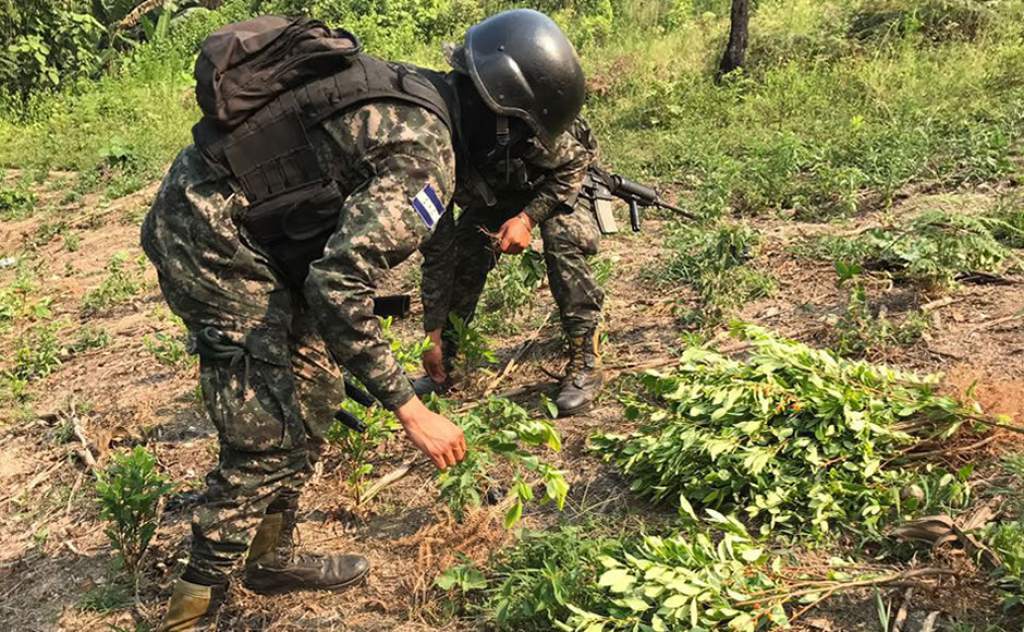 (Q24N) Insightcrime.org – Officials believe a coca plantation recently discovered in Honduras was set up by Colombians, suggesting a criminal migration that could potentially not only import the drug production businesses to Central America but also the coca curse that has long ravaged Colombia.

An intelligence source recently told La Prensa that the cultivation site — which consisted of approximately four hectares of coca plants, a nursery with seedlings and a processing laboratory — was set up three years ago by two Colombian engineers.

The Colombians had sought out an isolated location with an altitude, soil composition and rainfall conducive to coca cultivation then contracted local laborers to clear the area for a trial attempt, investigators believe.

After this pilot planting proved successful, the network allegedly began cultivating more coca and processing it into cocaine to be trafficked north.

Honduran authorities are yet to make any arrests in the case, but told La Prensa they are following the trails of the Colombians and their Honduran collaborators.

The investigator added that authorities believe this not an isolated case and said they had obtained information about other coca cultivation sites in the country’s isolated, mountainous zones, planning further operations to dismantle them.

As more information emerges regarding Honduras‘ first known coca plantation, it increasingly appears this was not an isolated operation but part of an orchestrated plan to establish coca cultivation and cocaine production in Honduras.

In some regards, the allegations that Colombians are leading this charge is surprising. Colombia is currently awash with coca, and likely producing more cocaine than ever before. However, if La Prensa’s sources are correct, then the Honduras cultivation was likely part of a long-term investment with an eye on a future that extends beyond current fluctuations and trends.

Colombian crime groups have good reasons to look to Honduras as a potential coca and cocaine-producing area. Colombia has teams of eradicators roaming the country, crop detection and monitoring capabilities, and a legal framework that restricts the importation and trading of the precursor chemicals required to turn coca leaf into cocaine. Honduras has none of these things.

Honduras is also closer to the world’s biggest drug market, the United States, and so would cut out a logistically complex and expensive leg of the cocaine trafficking journey. In addition, it has swathes of rural land that are difficult to access and have little state presence, a necessity for cultivating clandestine crops.

The state of Honduran institutions also offers advantages. The security forces, state officials and political leaders are weak and easily corruptible, even by Latin American standards, offering a greater level of protection than Colombia, which has made significant strides in this area even though these remain critical problems there as well.

There is a certain historical irony in the notion that Colombians would introduce coca cultivation in Honduras, and Honduran authorities would do well to heed history’s lessons: In the early expansions of the international cocaine trade, Colombia was, as Honduras is today, predominantly a transit nation for cocaine produced in Bolivia and Peru. It was only in the 1980s, when Pablo Escobar and his Medellin Cartel decided to boost their profits by moving production in-country, that it became the cocaine capital of the world. Escobar and the other early pioneers of Colombian cocaine production followed a similar pattern to that seen in Honduras, seeking out territories that are not only climatically suited for coca cultivation, but also hidden away and difficult to reach.

For communities in these places, coca brought with it a criminal twist to the classic “resource curse.” It provided money for poor farmers used to living in dire poverty, but the wealth was accompanied by corruption and extreme violence.

Drug production attracted armed groups and mafias. These underworld actors fought bloody battles to control the trade that killed tens of thousands and displaced millions. And even when they were not fighting, they often asserted their control through imposing their own brutal social order on coca-growing communities. Among those battling to control the coca trade were the principal actors in Colombia’s civil conflict, which poured the profits the trade produced into financing decades of war waged all around the country.

In addition, the wealth generated by cocaine production seeped into Colombia’s state institutions and social and economic elites, corroding the credibility of Colombian institutions and the very social fabric of the country and helping push Colombia to the brink of becoming a failed state.

Although Colombia was able to pull back from that brink, even today coca remains at the heart of the biggest security challenges the country faces. Record coca production is undermining the peace process with the country’s main guerrilla group, the Revolutionary Armed Forces of Colombia (Fuerzas Armadas Revolucionarias de Colombia – FARC), as the government struggles to meet its commitments to offer communities rural development and legal alternatives, while other armed groups take advantage of the guerrillas’ withdrawal to stake a claim to the trade.

However, there are key differences between Honduras and Colombia that would mitigate the impact of coca production migrating north.

Honduras is a much smaller country and the geographical area suitable for cultivation is tiny compared to Colombia, so the trade would be unlikely to ever reach the heights of wealth and power it attained in Colombia. Also, while Honduras is arguably as volatile and violent as Colombia has been, it does not have a civil war and the militaristic armed groups accompanying it, which have been behind the worst of the violence associated with the coca trade.

Nevertheless, Colombia’s history offers a stark warning about the coca curse for Honduras. If the Colombians behind the discovered plantation or any other coca pioneers succeed in turning Honduras into a cocaine production hub, then it could toss fuel on the flames for a country already ravaged by poverty, insecurity and corruption.