The same bacterial meningitis that killed seven in New York has attacked four people in Costa Rica this year and five more in 2012, according to the Ministerio de Salud (Ministry of Health). 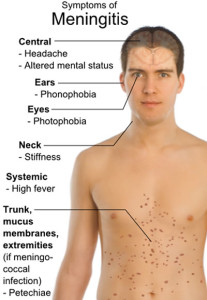 Health officials say the disease to be N. meningitidis, often referred to as meningococcus, the bacterium that can cause meningitis, that triggered a health alert in New York city, with some 22 reported cases since August 2010.

As explained by the head of Vigilancia de la Salud, María Ethel Trejos, this type of meningitis is the most aggressive. While most people with meningitis recover, it can cause serious complications, such as brain damage, hearing loss, or learning disabilities.

Meningitis is airborne transmitted by respiratory secretions (coughing, sneezing) and through close contact with secretions. These bacteria normally live harmlessly at the back of the nose and throat and can only be passed from person to person in nasal or oral droplets, for example by kissing or sneezing.

Even when passed on they are unlikely to cause any problems, as most people have a natural resistance to the bacteria. These bacteria can only survive outside the body for a short period of time and can not live long in the air or on household objects such as clothes or furniture.

Scientists don’t yet fully understand why bacteria which are harmless to most of us, cross into the bloodstream and turn into deadly killers. 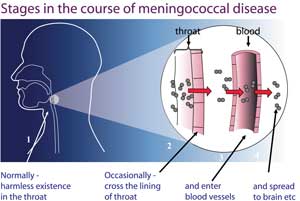 In Costa Rica, the cases over the past two years have been sporadic and in diverse populations. The last death to occur in the country were two in 2008.

In New York, though meningitis is not limited to the gay community, a man in New York City who has sex with men is 50 times more likely to contract meningitis than the general population, according to a research paper published in the Annals of Internal Medicine. Since the onset of the outbreak in August 2010, 22 gay men have been diagnosed with the same strain of meningococcal disease in New York City, with seven fatalities, the paper said.

Twelve of the 22 New York victims tested positive for HIV, which has helped fuel parallels between the recent outbreak and the period following the discovery of the AIDS virus in the early 1980s. Another 4 cases have been reported in Los Angeles since December 2012. The average age of the victims is 34.

Signs and symptoms
Suspicion of meningitis is a medical emergency and immediate medical assessment is recommended.

Treatment
Persons with confirmed N. meningitidis infection should be hospitalized immediately for treatment with antibiotics. Indeed, because meningococcal disease can disseminate very rapidly, a single dose of intramuscular antibiotic is often given at the earliest possible opportunity, even before hospitalization, if disease symptoms look suspicious enough.

Today, Sunday, June 20, only vehicles with "EVEN" ending plates CAN circulate The measure is countrywide and applied between 5:00 am and 9:00 pm, save...
Expat Focus