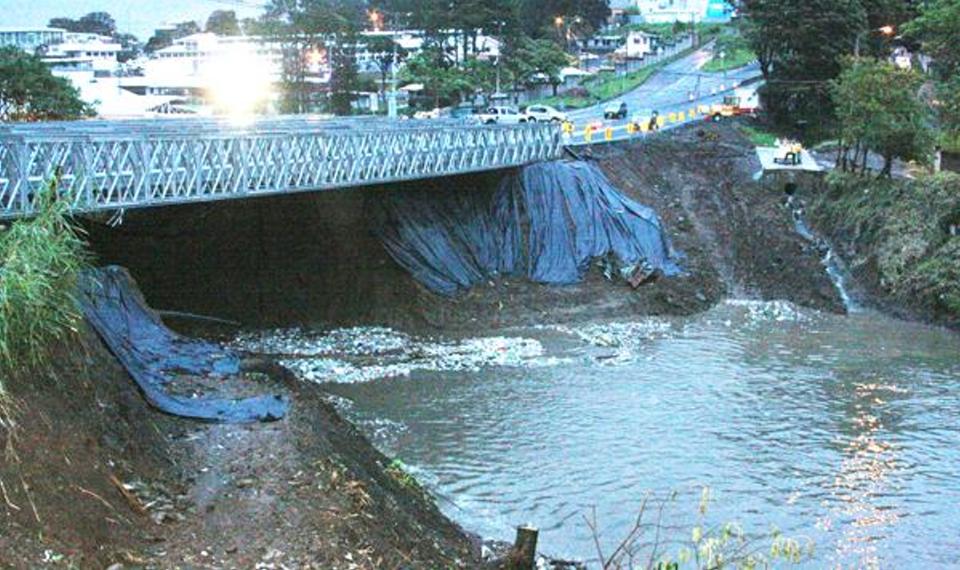 3:42pm – Despite comments by MOPT minister Pedro Castro this morning on ADN90.7 FM radio that “there is a strong possibility” that the Circunvalación would be re-opened this afternoon Wednesday, word is that it will not be. In fact it may even be days before the road is open again.

According to official word from MOPT, the four Bailey bridges installed over the Maria Aguilar river last week will come down, one by one, to stabilize the slopes and then proceed with the construction of a vaulted sewer.

No word when the removal of the bridges will begin and how long the work will take.

The problem on a 150 metre section of the Circunvalacion between Pavas and Hatillo 8 began on August 25 when the force of the water below, stopped by debris plugging up the metal tubes that moved the river’s waters, began eroding soil and
threatening the road above.

The quick solution of installing Bailey bridges to move traffic while work continued below was the same used to repair the sinkhole on the autopista General Cañas last year. The situation on the Circunvalación, however, is entirely different.

The Hernán Solís company that was contracted to install the Baileys is on record of warning the  Ministerio de Obras Públicas y Transportes (MOPT) and the Consejo Nacional de Vialidad (Conavi) of the risk involved with the structures, given the instability of the slopes.

The Materiales y Modelos Estructurales (Lanamme)  – National Laboratory of Materials and Structural Models – at the Universidad de Costa Rica had pointed out the same.

A press conference has been scheduled for this afternoon when minister Castro is expected to announce a temporary solution to one of Costa Rica’s busiest roads.

- Advertisement -
Paying the bills
Previous articleBusted: Fast and Furious in Costa Rica
Next articleCircunvalación To Be CLOSED For Two Months

We are all mentally exhausted by sitting in our...
Central America