The Ministro de Transportes, Pedro Castro, confirmed Monday that two Bailey bridges, spanning 54 metres, will be used on the Circuvalación or Ruta 39 as a temporary solution to the sinking that occurred on Sunday.

Castro said that the structures will probably be installed over the weekend, allowing crews to work on the site without further interrupting traffic flow.

The work to be performed will be similar to that done in the area of Los Arcos on the autopista Genera Cañas several months back, according to the Transport minister. 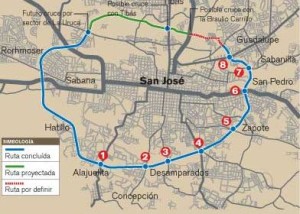 The priority of the Transport ministry and the Policia de Transito (traffic police) is to keep the 50.000 to 60.000 vehicles that use the Circunvalación daily, flowing with the least possible interruption.

One lane of the westbound on the Circuvalación between Hatillo 8 and Pavas had to be closed on Sunday when the sewer pipe of the María Aguilar river collapsed, producing a landslide to the edge of the road. The lane was closed as a safety precaution, avoiding further landslides due to the vibrations produced by traffic.

When the Circuvalación was built almost two decades ago, engineers of the time decided to install two sewer pipes to continue the flow of the river instead of building a more expensive bridge structure.

Over time and compounded with the lack of preventive maintenance, the pipes became clogged.