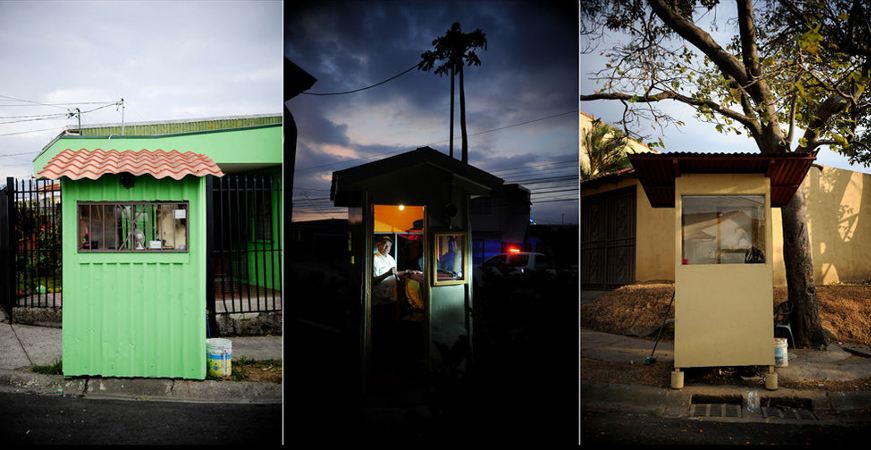 Private security guards fill a gap that police in Costa Rica are not able to for lack of resources. However, the same watchful eyes on the community, could also be the danger.

Night and day a group of inexperienced, undereducated and mainly foreigners, working in 12 hour shifts, keep an eye on homes in barrios (neighbourhoods) around the country.

The minimum wage for a private security guard  is ¢287.547 colones monthly, according to the list of minimum wages set by the Ministerio de Trabajo (Ministry of Labour) for the first half of 2014. However, few of the “barrio guards” earn that or even close.

It is estimated that the barrio guards make up more than 50% of the total number of private security guards in the country and most are foreigners. Age is also not a factor in working as a barrio guard. Take the example of “González”, a Costa Rican who at 68 years of age maintains private vigilance in a barrio in La Sabana.

The man told La Nacion that, after more than two decades of working as a guard in Tibás, he now works in a “quiet neighbourhood” to supplement his pension with ¢100.000 colones every two weeks that he uses to send is two girls to collegio (high school). González, told his story of how he only has a third grade education, lying to his prospective employer to ge the job. He said he came clean after being hired, and the boss let him stay on, being impressed on his personality: honest and hardworking.

To become a licensed private security guard with the Ministerio de Seguridad (ministry of Security), the requirement is the completion of a course similar to the basic police training, take a written exam to bear arms, submit a “clean” police record (hoja de delincuencia in Spanish) and take a psychological test.

Few of the “barrio guards” complete or are able to complete the requirements.

A perspective is in the example of Lira (a made up name), an undocumented barrio guard (no license from the Security ministry and illegal in the country), who told La Nacion that he prefers to take home ¢32.000 colones monthly to nothing. The sum of money is what he earns filling in for full time guards four days a month.

Often the guards will work 24 and 36 hours straight – double and triple turns – because the guy on the next shift does not appear. Maybe has quit, or busy filling in somewhere else or just too hung over.

By and large the “barrio guards” are hired by residents forming an ad-hoc community, wanting protection for their homes and families. Few, however, do the background checks necessary or take care in knowing who is outside their homes night and day, the person well of aware of the habits and comings and goings of everyone on the block.

Few communities hire any one of the 1.247 registered security companies, that makes up a group of some 30.000 private guards. Cost being the major factor. Informal guards will accept less money for the same work and do not demand benefits.

Often entrepreneurs will set up shop in a community, marking off a territory and then asking residents to make contributions. The level of presentation is totally based on the community, where in some cases the guards dress formally, even get a “caseta” to work out of.

But one general rule that applies to most communities is, never let the guard in. It is one thing to put trust in the person keeping an eye on your property, another to let him in to the house. It is OK to be friendly, strike up a conversation. But never into the house, even to use the bathroom.

[callout]A case in example, from my own barrio:

In my neighbourhood in Pavas, Felix and his group (one full time and several part time) provide us with around the clock security, a street forming a U, with two accesses onto the main street and a park. A few years back our block of some 20 homes was plagued with break-ins of our homes and cars. My home was never broken in, but my was on two occasions, once behind my fence, the other at noon, on the street in front of my house>

The high level of violence was attributed to Felix’s partner, who looked more like a criminal than a guard, work only nights, when he could sleep, after working all days a gardner. I did accuse him on several occasions that he was a “complot” to the nearby gangs, but in reality, it was his weak guarding – asleep when I came in a three in the morning, nowhere to be found at 4. Or 5. Wide awake at 6, ready to go home. Or work.

Once we got rid him, a process that included getting all the neighbours together a few times to get any consensus, some fearing the threats,  fearing that getting rid of him will mean bring unknown havoc of vengeance on to out small street. Even Felix feared his sleeping partner.

It’s been almost two years, since tranquility was back in our lives. No more break-ins. My dogs can now sleep in the house instead of keeping guard outside at night.

Keeping a guard outside does not mean your home is safe against the hardened criminal gangs, the ones that specialize in home invasions. It does, however, keep out the “drogaditos” (crackheads) who commit all types of petty crimes, always on the lookout for opportunities.

Often, as I move around my area, I can see groups of youths walking through areas, working as scouts, probably marking spots where the night crew takes over to do their thing. The scouts also, I am certain, look for weaknesses in the guards. Or maybe to supplement their income.

In my little corner of Costa Rica, at least for today, it is tranquil. Not sure about tomorrow, when Felix has his day
off.

Today, Tuesday, June 8, only ODDS can circulate. The measure is countrywide and applied between 5:00 am and 9:00 pm, save for those under the...
HQ