Bianca Jagger: Ortega imitates Somoza by “endangering the national sovereignty and selling off the natural resources.”

TODAY NICARAGUA – This past Thursday in Managua, Nicaragua, Bianca Jagger, human rights defender and founder of the Bianca Jagger Human Rights Foundation and Amnesty International launched a “global campaign” to demand the repeal of Law 840 passed in 2013, which awards a concession for the construction of an Inter-Oceanic Canal to the Chinese company HKND Group.

On Tuesday, August 15, Bianca Jagger will participate alongside other civil society organizations in a national march against the project of the Grand Canal Interoceanic of Nicaragua in La Fonseca.

Bianca Jagger: Ortega imitates Somoza by “endangering the national sovereignty and selling off the natural resources.”

At the presentation, Jagger offered a recount of her opposition to the Nicaraguan counterrevolution and her support for the Sandinista revolution during the 80s, only to later regret the fact that Ortega is imitating the Somoza’s by “endangering the national sovereignty and selling off the natural resources.”

“He is delivering over the country to a company we know nothing about,” insisted the well-known activist. “It’s sad that Ortega should destroy the lake [Cocibolca], the forests and any part of the country together with this project that won’t bring progress,” she said. “Has he no shame about selling off the resources of the farmers and the indigenous peoples?”

Jagger sustained that the persecution against the farmers is real. “They won’t leave them alone,” stated the human rights advocate.

Francisca Ramirez lamented the fact that her demand to repeal the canal law hasn’t been heeded by the Ortega government. “Our history has 100 years of bloodshed, and we’re falling into the same error,” alerted the rural leader.

The report, entitled “Danger: Rights for sale”, asks Daniel Ortega’s government to “impose a moratorium on the implementation of all aspects of the work on the Project.”

On its website, Amnesty International says, “Throughout nearly 200 interviews, we gathered stories with the same messages: the authorities are selling their land without consulting the people. The State’s response to these allegations is silence.”

According to the Amnesty recommendation, this moratorium should remain in place until “legal and procedural safeguards are in place that comply with human rights standards, including effective consultation of those who will be affected and prevent forced evictions.”

Our life is this land, without it, we have nothing

The report affirms that neither the government nor HKND realized a genuine “consultation” about the canal project with those potentially affected: some 120,000 people along the entire canal route. 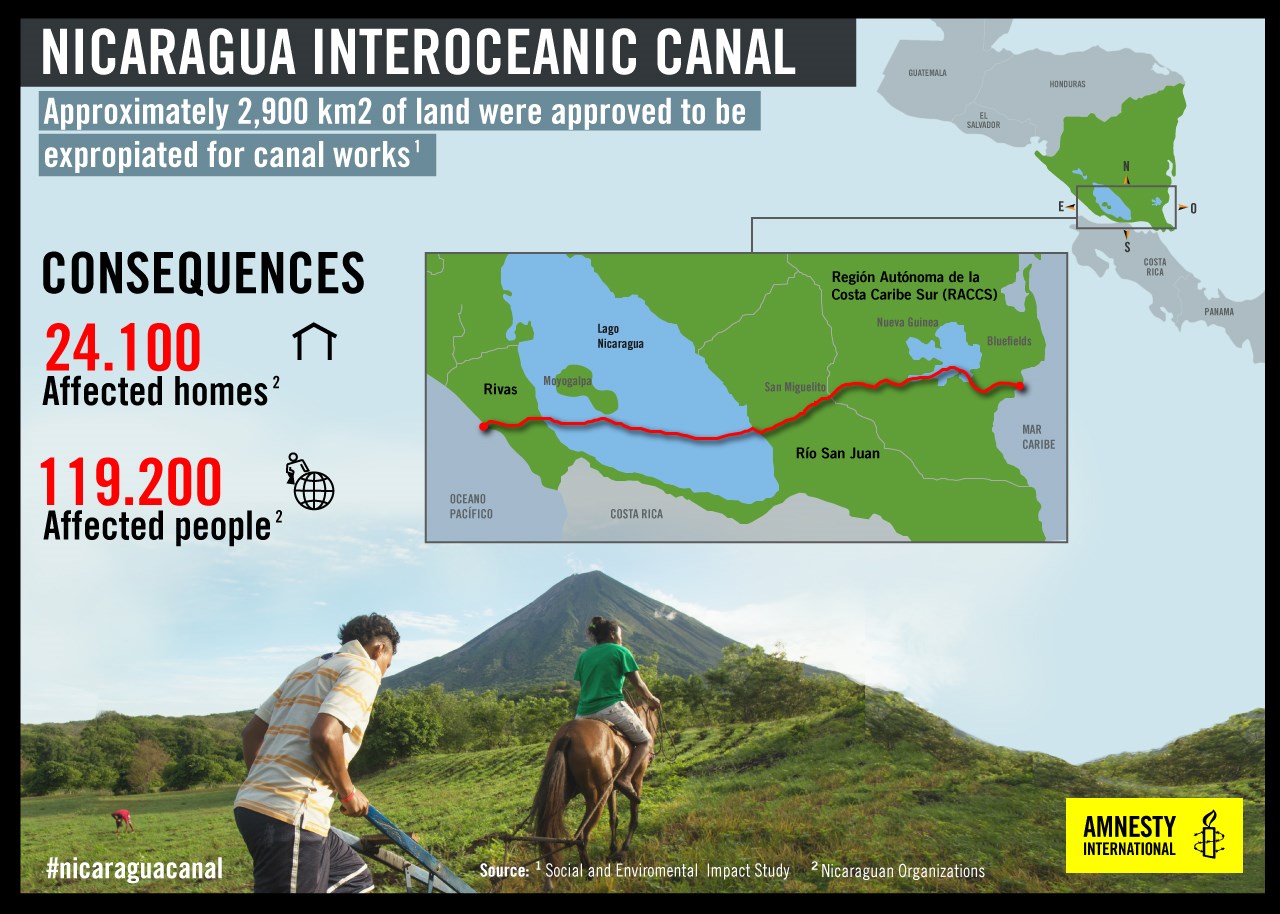 In Amnesty’s view, the project of an Inter-Oceanic Canal in Nicaragua “is an emblematic case in the Americas, because it reveals how powerful economic interests impose their will over the interest of the great majority.”

The Amnesty report is based on a process of direct consultation with more than 190 farmers and an analysis of the normative framework of the concession.

Campesino and Indigenous communities alike, from east to west of Nicaragua, living in communities along the proposed canal route, say that they had lived in the same land for several generations. People were proud of working the land to provide for their families.

“Almost all of us living here live off the land, planting crops, raising animals. We don’t know how do to anything else; working the land is what we know. That’s why we would prefer to die here, because if we go to the city, what are we going to do?,” they told Amnesty International.

Article originally appeared on TODAY NICARAGUA and is republished here with permission. Read the original.

Q24N - The first country in the world to...
Consumption