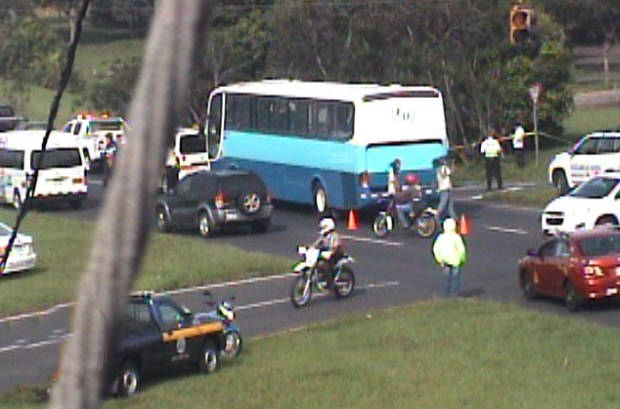 The fatal accident Wednesday morning when a bus could not avoid a cyclist on the autopista General Cañas, at the intersection east of the airport, renewed calls by Transport authorities that bicycles have no place on the highways of the Central Valley.

It was shortly after 7am Wednesday when a cyclist, crossing the fast moving lanes of the autopista, was struck by a Puntarenas bus headed for the Pacific coast.

The driver of the bus told authorities and evidenced by the video captured by Telenoticias, he could not avoid the accident, clipping the bicycle that resulted in the death of the man whose identity was not made public.

This is the 17th death this year of cyclists losing the staredown with vehicles.

The autopista General Cañas, with maximum speeds of 80/90 Kp/h,  though vehicles zoom at 100 kp/h plus, does not have a shoulder. The white line is practically in the “cunetas” (gullies) that is the side of the roadway between the Juan Santamaría (San José) airport and La Sabana.

The Circunvalación (the ring road around San José), the Bernardo Soto and the Ruta 27 (San José – Caldera) do not permit cyclists, however, that is no deterrent for many.

- Advertisement -
Paying the bills
Previous article“Lapiz” Tico
Next articleHow Sad It Has All Become!