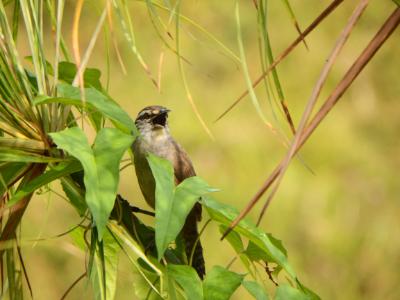 Q COSTA RICA / Karla Rivera-Cáceres, a University of Miami biology graduate student, plays a harmonious duet of singing wrens from a recording she captured out in the field during a recent trip to Costa Rica.

“The song sounds like one bird but if you listen closely, it’s a male and female wren singing a duet in perfect unison,” said Rivera-Cáceres.

Along with songbirds, many animal species perform duets, an uncommon vocal interaction that can occur between mated or unmated species, such as frogs and crickets. But the coupled wrens Rivera-Cáceres recorded in Costa Rica sing alternating phrases, or parts, of the song so smoothly and with such complexity and fast tempo that the untrained ear may hear just a single bird.

For years, Rivera-Cáceres studied the “duet codes” (non-random association of song types) of paired wrens and wondered if the ability to perform their complex and seamless music was a skill the birds were born with or learned during juvenile or adult stages of life. Now, after two months of intense listening in Costa Rica, she knows that they can learn new songs with new partners, even as adults. She says the newly learned songs are akin to prenuptial agreements.

“It’s like the birds think: If you’re willing to invest the time and energy to learn a new duet code, then I am sure you are not going to leave me because if you do, you would lose a big investment and would need to learn a whole new duet code with another partner,” she said.

According to Rivera-Cáceres, a male wren has his set of songs and a female wren her own set. When paired, the birds link their song types in a non-random way; for example, if the male sings his type “A” song the female may respond with her type “C” song and if the duet fits, the wrens will perfect their duet code until it becomes seamlessly unified.

“I selected this particular species for my research because their duets are very complex,” said Rivera-Cáceres. “The birds need to be in sync, so when one bird sings the other remains silent, and they do this in a very fast tempo while avoiding any overlap.”

Past studies on duetting wrens focused on the function and evolution of the songs, not necessarily the birds’ development to perform them.

“Understanding the development process of duetting and whether the wrens invest the time and energy to duet with their partners is key to determine if these duet rules are difficult to acquire and thus demonstrate the birds’ ability and skill to learn a new song when paired with a new mate,” said Rivera-Cáceres.

Her research, “Neotropical wrens learn new duet rules as adults,” illustrates the complex behavior of duetting wrens by explaining the process of how the birds acquire the ability to duet throughout their lives. It was published in the journal .

“Paired wrens that are together for a longProceedings of the Royal Society B time keep the same rules across years but each pair in the population will have its own rules. In other words, pairs from the same population do not duet the same,” said Rivera-Cáceres. “It didn’t make sense to me that wrens don’t continue to learn new duet codes during adulthood because if they did have fixed rules, which they learn during the juvenile stages, when the birds got older they would be unable to pair with another bird singing a different set of song rules.”

To prove that wrens learn new duet rules instead of repeating a learned rule from their juvenile stages, Rivera-Cáceres performed a “removal experiment” in Costa Rica, moving either a male or female wren from one territory to another to test if their duet codes changed when they found new partners. To relocate the wrens, she played a recording of another wren’s song in a pair’s territory. When one of them flew to the speaker to investigate the “intruder,” she captured it in a thin net and released it elsewhere in the forest.

“At first, the new pairs struggled in their coordination and duet code adherence but they caught on over time,” said Rivera-Cáceres. “What I did find interesting was that the male wrens changed their duetting rules more than females. The females normally kept the responses they had with their old mates, while male duet codes appear to be more flexible. It did take the new pairs months to perfect their new duet codes but over time, they did get better and better.”