[BLOG] Shift of Traditional Role Of Women in Costa Rica

Undeniably “machismo” is an integral part of Costa Rican and Latin society in general, where men are still seen as the primary breadwinners even when they are not, while women are seen as being responsible for domestic work. 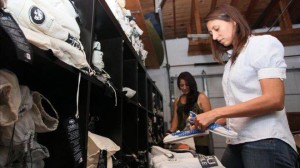 The traditional family roles of men and women have certainly changed over the last few generations. Women in Costa Rican society are hard workers and more ethical than their men. Today women in Costa Rica work outside the home, and more and more heading single family households.

In many businesses today women are in leadership roles, making decisions. At many banks, for instance, women are tellers, a role that only a decade back was the exclusive role of men. I can remember going into the Banco Nacional and Banco de Costa Rica in downtown San José  in the later 90’s and taken aback to see men as tellers instead of women, as I was used to in Canada.

The shift, from a girl being raised to believe that education was not important for her, so she had to stay home and help her mother with chores, that the workplace was not the primary area of women as career advancement is viewed upon as unimportant for women, has been rapid. In the San José area at least.

That change has not been missed by country’s financial institutions.

At the Banco Nacional (BN), for example, they have the “Banca Mujer“, a program for women to succeed in business and with financial services geared to women.  ‘The BN initiative improves access of women entrepreneurs to the financial system, including programs to support companies managed by women through financial and non-financial services. The Banco Nacional says its program is allow women to be the motor and driver of development for the country”, says the bank’s website.

The Banco Popular offer women its BP Empresarial, offering professional women banking services. The bank says that this sector has grown 70% since 2010. “More and more women are involved in business management, requiring proper attention to the needs of their business”, says the BP website.

The BN says that their Banca Mujer has now more than 14.000 businesswomen customers, more than doubling the portfolio since 2010. This year the BN says it has placed more than ¢115 billion colones in credit director to women in business.

At the Banco de Costa Rica (BCR), the business of catering to women is described as “it’s an attractive industry with great demands”.

In addition to the three State banks, public banks have also started devoting resources to the development, growth and training for women business managers and owners.

The lack of mentors or extensive networking makes it hard for businesswomen to grow their companies in Costa Rica and Latin America. According to a study by the Multilateral Investment Fund, or FOMIN, a unit of the Inter-American Development Bank shows that 46 percent of female entrepreneurs in Latin America have no mentors. The survey interviewed entrepreneurs in Brazil, Mexico, Colombia, Argentina, Peru, Chile, Costa Rica, Uruguay and Jamaica.

Besides heading or owning businesses, women today in Costa Rica are also playing an important role in politics. For the first time in the history of the country there has been a woman president, and a large number of women as ministers, deputy ministers and heads of autonomous government agencies.

Despite this advancement, the poor performance or “not living up to expectations” by Presidenta Laura Chinchilla leaves many to believe that we will not see another woman president in Costa Rica for some time. But that may not be so far off. Although there is no woman candidate for the 2014 presidential race, each political party has a woman in the vice-presidency slot.

QCOSTARICA - The United States has eased travel advisories for most Central American countries, with the exception of Costa Rica and Nicaragua, according to...
Guatemala

HQ - The Fuerza Publica (National Pollice) intervened an agglomeration of people on the outskirts of the Rincón Grande de Pavas school during the...
Coronavirus