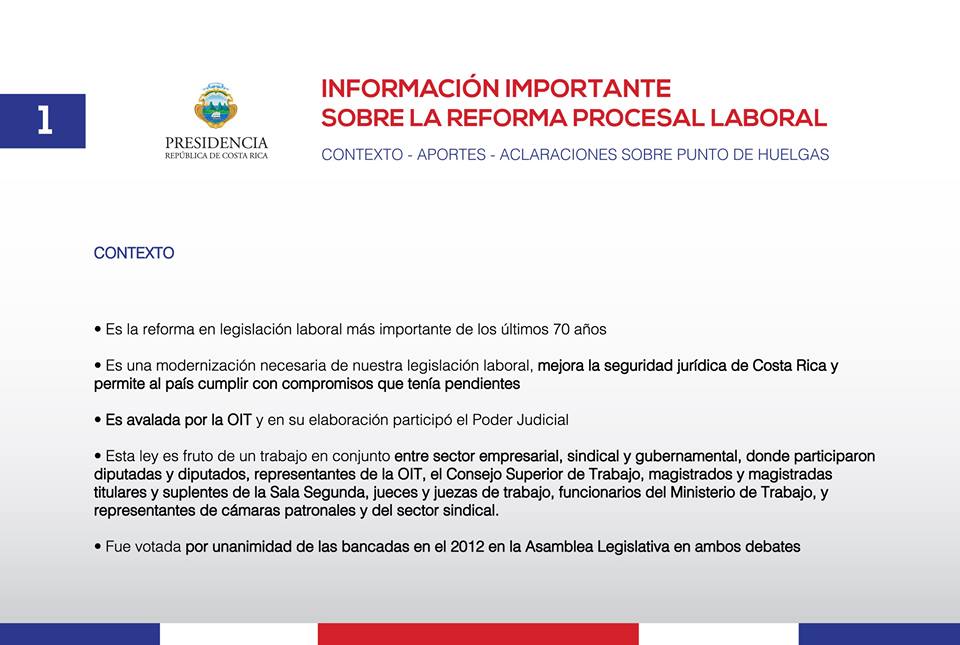 QCOSTARICA – President Solis’ Presidential Decree lifting the veto (President Chinchilla’s veto) preventing changes to the Labour Process Code which would allow Public Sector essential services strikes (eg. police, firemen, hospital workers, etc.), would, on its face, appear to be the final “nail in the coffin” for Costa Rica’s Economy. Certainly, it will send a strong message to business owners, entrepreneurs, and foreign investors, that Costa Rica is a “lost cause” on all accounts.

In some of my previous blogs, I have invited President Solis to more actively utilize his “Presidential Decree granting powers”, to hopefully circumvent some of the inefficiencies of the Legislature in getting the correct job done and putting Costa Rica on a path to economic prosperity.

This current Presidential Decree is not what I had in mind. Costa Rica has already established a reputation as having the most highly paid Public Sector jobs of any country in Latin America for similar employment positions and in many cases, salaries exceed even those of First World countries such as the U.S. and Canada, for similar Public Service positions held. No additional labour protection is required for these Public Sector workers, that isn’t already provided for in existing Labour Legislation in Costa Rica.

However, having said that, let’s make an analysis what has just happened in political terms and consistent with the legal and political process. The implementation of the Labour Process Code changes will take eighteen months. During this period, I expect at least one, if not many, Constitutional Court challenges to the implementation of the changes taking place. The most obvious one being that the changes would be in direct conflict with Article 61 of the Political Constitution of Costa Rica, which prevents such Public Sector essential services strikes from taking place. The provisions of the Constitution over-ride any Presidential Decree granting powers that exist. In my opinion, a Constitutional Court challenge on this ground alone, should be sufficient to render the Presidential Decree a nullity.

The second consideration is, what was the real political motivation in issuing the Decree by the President. Obviously, it is not a secret to the President when he signed the Decree that a Constitutional challenge would most likely be mounted against its effect being implemented. However, by signing the Decree, he did garner the support of the Frente Amplio Party (the only Political Party supporting it), a factor that is important for the PAC Party, of which the President is the Leader, to retain control of the “Directorio” in the Legislature, which will be voted on in the Legislature in May 2015, and well before the implementation of the Labour Process Code changes take place. This will provide time to consider what changes to the Labour Process Code will be implemented, if any.

In the final analysis, this may be a “to have your cake and eat it too” move by the President, knowing that the likelihood is the proposed changes to the Labour Process Code will not be implemented in-fact, but the control of the Legislature by PAC will be assured by the support of the Frente Amplio Party. Of course, business owners, entrepreneurs, and business investors (foreign, or otherwise), are angry at the Presidential Decree having been signed and have publicly expressed such. The signing of the Decree certainly sends a very negative message to any foreign investors looking at Costa Rica as a business investment opportunity.

It will be interesting to see how this issue “plays-out” in the coming months.