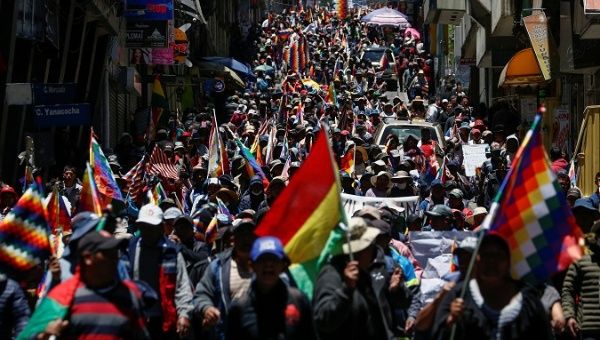 Bolivian security forces set up roadblocks across Cochabamba on Monday as mass demonstrations are taking place against the brutal attacks carried out against the people last week.

Three marches entered the city of Cochabamba, chanting for justice and the end of this de-facto government that is led by the self-declared president Jeanine Anez.

Last Friday, the Bolivian security forces attacked a crowd of civilians in Cochabamba that were demonstrating in support of the deposed President Evo Morales. The attack would turn into a massacre as nine Indigenous people were killed at the hands of the security forces.

The Indigenous people in Cochabamba were protesting the recent coup that led to the overthrow of the democratically elected President Evo Morales by the right-wing opposition.

In response to this massacre, tens of thousands of Bolivians took to the streets of Cochabamba to denounce the killings and the new government that is led by the self-declared president Jeanine Anez.

According to one protester that was interview by teleSUR, “we want the resignation of the self-proclaimed president. We want justice for all our fallen colleagues. These have been murders. The police and the military are killing us as if we are animals! We want justice!”

The self-declared leader has responded to these demands by stating that “we are doing everything in coordination and in unity with our brothers in the police. That is what the current circumstances call for.”

Anez has faced much criticism since declaring herself president, as many countries have refused to accept the coup that led to the ousting of the democratically elected leader Evo Morales.

Nestled in Bolivia's Cochabamba valley is the village of Tiraque. One...
Read more