Brazil: River pirates of the Amazon 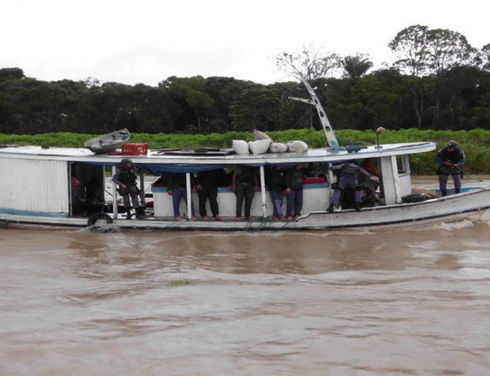 TODAY BRAZIL – Pirates aren’t limited to operating on the high seas. Even on the rivers of the Amazon region, there are gangs that specialize in overtaking and pillaging all types of vessels. 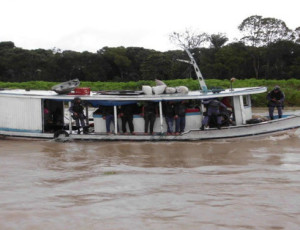 Recent incidents show river pirates of the Amazon may be just as cruel as the Somali pirates portrayed in Captain Phillips, the Oscar-nominated film that tells the story of a ship overrun by pirates on the Indian Ocean.

In February 2013, the body of the owner of a speedboat was found in the Rio Negro River in Manaus, the capital of the state of Amazonas. He had been killed by the gang known as Piratas do Rio Negro.

Also known as Barriga D’água, the gang has robbed vessels, killed their victims and thrown their bodies into the river, with the abdomens sliced open so the bodies wouldn’t float.

The gang’s alleged leader, Arlindo Jabelo de Sena, was arrested last May. He has been charged with three robberies, but the police suspect he has committed at least another 10 crimes along the riverside in Manaus and municipalities in Amazonas.

“The gang’s main targets were the drug traffickers and smugglers,” said Lt. Valdemir Reis, the commander of the Second Company of the Environmental and River Police of the Military Police of Amazonas State. “They killed their victims because they knew that if they remained alive, they would retaliate.”

Throughout the Amazon region, the Military and Civil police have the help of the Armed Forces in the fight against river pirates.

In the state of Pará, the Military and Civil police monitor rivers with the support of the Fire Department, the Navy and Brazilian Environmental Protection Agency. In 2011, the Public Safety Secretariat of Pará created the River Group of the Public Safety System (GFLU) to improve integration among these agencies.

In January 2013, Operation Corsário resulted in the arrest of 11 pirates who had been committing crimes along the Amazon River in Pará. The operation, which came after six months of investigations by the GFLU, was carried out during a major storm to prevent the pirates from hearing the motors of police vessels as they approached.

“Those arrested were members of different gangs, but they weren’t rivals. Some of the criminals worked with multiple gangs,” said police officer Dilermando Dantas, the director of GFLU. “In this case, the arrests were carried out based on anonymous tips.”

There are two pirate gangs operating in Pará, Dantas said.

The police openly patrol only the major waterways, Dantas added. But the investigative policing is divided into regional sectors and carried out both in the water and on land.

“Our work is carried out in conjunction with the riverside communities,” said Maj. Kleverton Firmino, the commander of the Independent River Policing Unit of the Military Police, which operates under the GFLU. “When we gain the trust of the population, they start to file complaints.”

The arrest of the pirates is occasionally hindered by the sheer size of the territory and the rivers’ constant depth changes.

“To overcome these problems, we are complementing our intelligence work and ongoing training with new equipment and larger vessels,” Dantas said.

Each area of the Amazon region has gangs with different characteristics.

In the central and northeastern regions of the Marajó archipelago, for example, the pirates specialize in the theft of livestock, as raising cattle is the region’s primary economic activity.

In the south and southwest of the archipelago, there’s a significant flow of cargo from Macapá, the state capital of Amapá, and Manaus, Amazonas’s capital. In that region, the pirates specialize in the theft of cargo and fuel.

Meanwhile, along the riverside in Belém, the capital city of Pará, and its adjacent islands, the crimes are committed along major waterways, against passengers and crew members, as well as on the riverbanks, against the riverside communities.

One of the most shocking incidents ended with the death of university student Rafaelen de Souza Cavalcante, 20, in 2011. She died from a gunshot to the head when the boat in which she was traveling was invaded by river pirates.

The gang, known as Família Caterpillar and responsible for Cavalcante’s death, has been implicated in 70% of the attacks on vessels in Belém, according to police. At the end of that year, nine members of the family and another eight people associated with the gang were arrested by Civil Police officers from the River Crimes Unit.

“Most of the criminals are bandits who had to flee the capital city and wound up occupying the rivers,” said Lt. Col. Ayrton Norte, the commander of the Military Police Battalion in Solimões in Amazonas state. “They thought they would do well on the rivers, but the authorities created a task force to bring to the rivers the same level of enforcement that’s used on land.”