Some described her first-day outfit choice as "shocking" and "vulgar", and branded Paulinha a "representative of prostitutes". 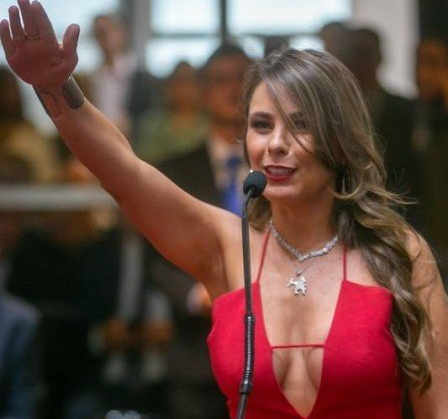 A Brazilian senator has faced backlash on social media for wearing a revealing outfit at her inauguration ceremony. She insists that the way she dresses has nothing to do with her job and now wants to bring her cyber bullies to justice. 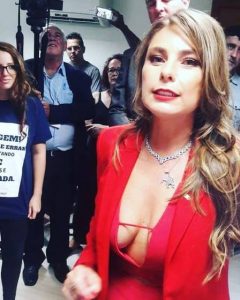 Ana Paula da Silva, known locally as “Paulinha”, wants to prosecute those who targeted her with hateful comments, and pundits say she could have the law on her side.

The freshman senator entered the international spotlight earlier this week after photos emerged of her attending a swearing-in ceremony at the Legislative Assembly of the southern Brazilian state of Santa Catarina.

Paulinha, who served two terms as mayor of the city of Bombinhas prior to her election to the state legislature, was pictured donning a revealing red jumpsuit with a matching top, which she later took off.

While her first-day outfit choice was widely acclaimed on social media both in Brazil and overseas, some commenters described it as “shocking” and “vulgar”, and branded Paulinha a “representative of prostitutes”.

According to Brazil’s G1.com news portal, one of the attackers identified himself as a military police officer.

The 44-year-old senator says the comments have hit her very hard. “Being criticised in public life is something normal and expected. But I felt psychologically violated,” she told the Extra newspaper. “An internet user said that if I get raped I cannot complain. One woman commented that I could not speak of God, for God would not bless a woman like me.” 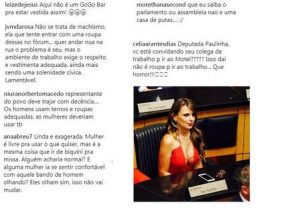 “I also have my side empowered and that makes me get up every day and say: this is me and I fight to break paradigms and patterns that do not fit with what I think and think many women who are represented by me.”

Criminal lawyer Leonardo Costella was quoted as saying that in the lawmaker’s case, the offensive comments can qualify as libel or slander, and da Silva can claim compensation for moral damages.