Bryan Ruiz, unquestionably the big star for Costa Rica’s national soccer team, will be getting more play time ahead of the World Cup in Brazil in June. 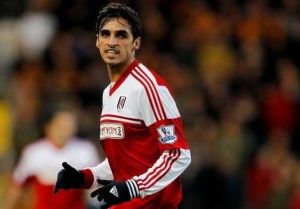 The Costa Rica international has fallen down the pecking order at Fulham since Rene Meulensteen was placed in charge, featuring in just two games under the Dutchman since he replaced Martin Jol at the start of December.  On Tuesday, Fulham  confirmed Ruiz has joined Dutch side PSV Eindhoven on loan until the end of the season.

The contract he signed should give the 28-year-old Ruiz more opportunities to play as he seeks form ahead of Costa Rica’s appearance in Brazil. He has appeared only 14 times for Fulham this season.

Ruiz moved to Europe in 2006 when he joined Gent and went on to average almost a goal every other game during his spell in Belgium, before replicating such form at Twente.

He will lead Costa Rica in to the World Cup, where Jorge Luis Pinto’s side will come up against England, but it remains to be seen if he will return to Fulham next season.

Q24N - Arriving in the Guatemalan capital about two hours late, after the plane in which she was traveling had to turn around due...
Trends

QCOSTARICA - A moderate decline in new cases for the third consecutive week allowed the hospital system to avoid the dreaded collapse and rapid...
Photos of Costa Rica