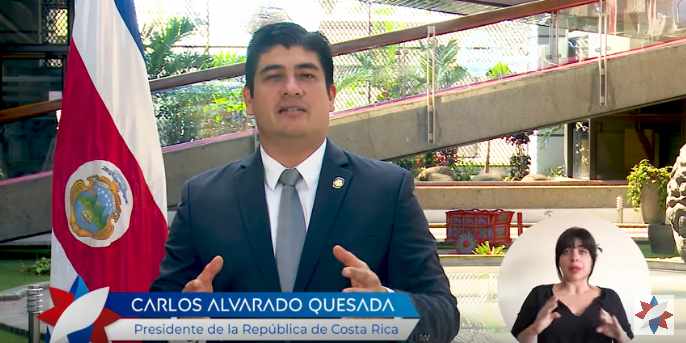 On national television, Sunday night, President Carlos Alvarado, assured that the Government has allocated the necessary resources to guarantee a safe, orderly and registered migratory control.

In the message, the president called for peace, calm and to act prudently and sensibly, following the xenophobic demonstrations carried out by independent groups on Saturday in downtown San José against Nicaraguan migrants.

Alvarado said that since June, 37 institutions work in an ‘articulated manner’ to address the issue of migration and that people should not act out of fear.

Among the actions mentioned, the reinforcement of the police at the Peñas Blancas and Tablillas border crossings; migratory operations carried out on public roads (spot checks) and ‘cuarterias’ (room houses) and the optimization of services of the Dirección de Migración y Extranjería (DGME) – the immigration service.

“We have implemented an effective migration control to deport people with unwanted profiles,” he said.

He also said that the health condition of migrants is monitored and police intelligence to deal with human trafficking.

The president added that they will also seek to deepen actions in coordination with the Legislative Power, as well as local governments and churches.

He also announced a request for cooperation from international agencies such as the United Nations, the United States, and the European Union.

“I call for calm, for peace, to act with prudence, not to fall into provocations or calls to hatred. Let us inform ourselves correctly, each person plays a key role in the preservation of social peace that we as Costa Ricans have built for decades and enjoy today ” concluded the president’s message.