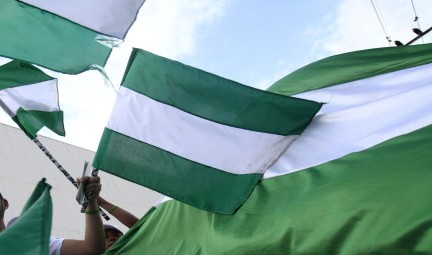 COSTA RICA NEWS – The cash-strapped Partido Liberación Nacional (PLN) political party has found a new way to vacuum up a little extra dinero — it has levied a “tax” of 1% on all official advisors to their legislators. That money comes from taxpayers, by the way. The party did not have enough money in its coffers to campaign during the run-off last April.

Still in debt, despite a retirement from the Presidential run-off won by rival Luis Guillermo Solis, the party says it needs the funds for its normal operating expenses. Each adviser earns ¢1.3 million colones per month.

The PLN has the largest number of lawmakers in the Legislative Assembly, 18, which accounts for 104 advisers. The advisors became aware of it last month when each received a slip to sign, pledging a “voluntary contribution” to the cause.

According to the administrative director of the party, Alexandra Valverde, they can have the deduction taken out of their salaries, or deducted from their bank accounts or make it in cash. She revealed that they had not experienced holdouts yet but said (ominously for a political job) that refusal would be reported to the party executive committee.

She also noted that the Electoral Code article 54 allows them to ask for contributions of party members and that the national party assembly in 2013 authorized a voluntary contribution. Whether the deduction from their paychecks can be justified as “voluntary” may not be determined without a legal challenge.

La Nacion reported that the proposal was offered by current lawmaker Rolando Gonzalez and had the approval of Liberation’s Presidential candidate Johnny Araya. Gonzalez noted that contributions of this type are also asked of those Liberationists elected to public office.

“Historically, contributions for maintenance of the party have existed,” explained the lawmaker, “but at some moment it was ignored. Now we’re re-establishing it. The lapse hurt our party finances and affected the spirit of Liberationists’ solidarity.”

The obligation only applies to those appointed after 2013 and just contributions from lawmakers and their aides amounts to 24 million colones during the four years. (The lawmakers really get nicked compared with their aides, 38,000 per month!)

According to press reports, the party owes an uncovered debt to their suppliers of 208 million. This figure comes from an audit by Banco Lafisa and consists mostly of private loans. The party also owes overtime pay from November, December and January during the height of the electoral campaign.

The party also owes the Supreme Elections Tribunal for overclaiming campaign expenses. La Nacion also commented that much of the financial plight comes from the gamble that Araya would win 40% of the vote Feb. 2 but he got only 29.7% and did not campaign for the April runoff.

That meant that Liberation was only reimbursed by the Tribunal campaign expenses for 5,26 bllion instead of the six billion colones it was counting on. Financially, that put the party on the ropes and it continues to be pummeled by creditors.

According to party treasurer Alex Sibaja Liberation does not have a fixed income but party collaborators are now beating the bushes to scare up “permanent collaborators.”

- Advertisement -
Paying the bills
Previous articleStudents in Nosara Raise over $1,000 for the Electrocuted Monkeys
Next articleTurf War Of Rival Drug Gangs Suspected For Murder Spree in Desamparados