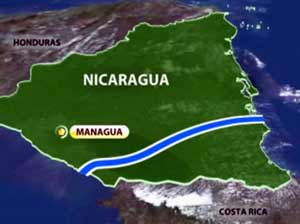 CENTRAL AMERICA NEWS (Prensa Latina) Media outlets and social networks on Mondays showed the general expectations in Central America due to the start of construction works of the new inter-oceanic canal in Nicaragua.

The sources recall that the Chinese company HK Nicaragua Development Investment (HKND), based in Hong Kong, will be in charge of implementing the route that will link the Pacific and Atlantic oceans like the one in Panama.

The business portal CentralAmericaData.com, the journals La Prensa Gráfica (El Salvador) and La Nación (Costa Rica), among others, stress the canal could host .5,100 ships a year, including those of large dimensions

The sources refer to data issued by the Nicaraguan Government’s Commission for the Inter-Oceanic Canal, according to which the canal will cover 278 km from east to west, 105 of them in the Lake Cocibolca, the largest freshwater lake in Central America.

The project includes the construction of two deep-water ports, one in each side of the canal, a free trade area, a tourist complex, an international airport and several roads.