(Q24N) A new study reports that 92 percent of refugees from the Northern Triangle countries of Central America – El Salvador, Guatemala and Honduras – have witnessed or experienced traumatic and violent events such as kidnapping, sexual violence and assault, and the murder of loved ones.

The report, entitled “Forced to Flee from the Northern Triangle of Central America: a Neglected Humanitarian Crisis,” was released Thursday by humanitarian non-governmental organization Doctors Without Borders, or MSF. The report drew on two years of surveys, medical data and testimonies collected by MSF as it provided medical attention to migrants. 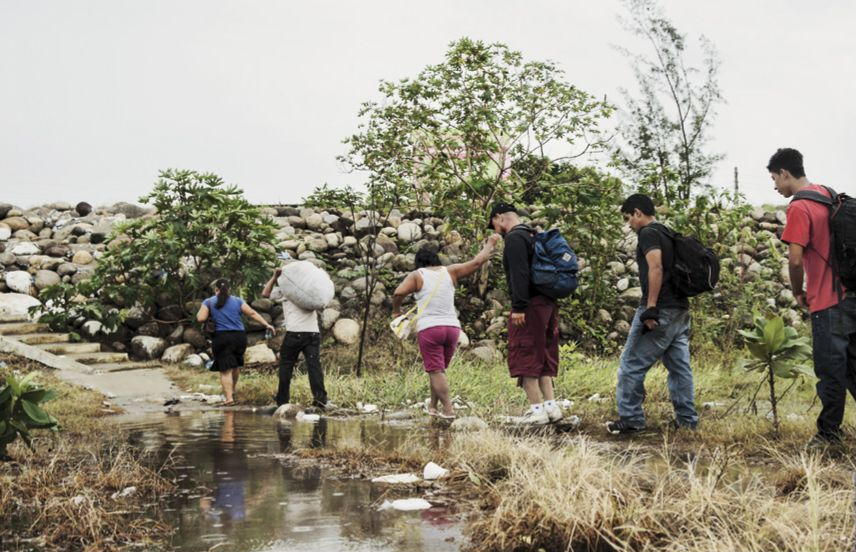 “Murder, kidnappings, threats, recruitment by non-state armed actors, extortion, sexual violence and forced disappearance — these are the realities of war and conflicts also faced by people in this region of Central America,” said MSF Head of Mission in Mexico Bertrand Rossier in a statement accompanying the report’s release.

“While there are certainly people leaving these countries for better economic opportunities, the picture that emerges from our report is one of terrorized vulnerable people running for their lives and those of their families.”

The streaming outflow of migrants from the region has been deemed a crisis, yet many countries intentionally misclassifly migrants fleeing violence in as simple economic refugees.

The report’s release comes as U.S. President Donald Trump continues to boost the capabilities of immigration authorities to incarcerate and deport unauthorized migrants, regardless of the circumstances that pushed them to the United States.

Refugees from the violence-plagued Northern Triangle countries, including children, are often targeted by gangs and, in the case of girls, face the danger of rape and sexual assault. Almost a third of women reported sexual abuse.

The fleeing populations continue to experience violence on the tortuous route to the U.S., including torture by authorities, kidnapping and human trafficking at the hands of criminal gangs. Two in three surveyed refugees reported violence during their trek through Mexico ​​​​.

In many cases, immigration authorities in Mexico – with staunch assistance from Washington – have apprehended U.S.-bound migrants and returned them to their countries of origin, sealing their fate while breaching international legal obligations to protect refugees and children whose lives are threatened.

“Attempts to stem migration by strengthening national borders and increased detention or deportation, as we have seen in Mexico and in the US, ignore a genuine humanitarian crisis and do not curb smuggling and trafficking,” Rossier said. “These strategies have devastating consequences on the lives and health of people on the move. To play on public fears and merely view these people as a security or an economic issue is short sighted.”

On Tuesday, the Texas Senate passed a law written by for-profit prison company GEO Group legitimizing the use of migrant family internment compounds – or “baby jails,” as local legislators call them – as so-called “child care facilities.” The bill would allow for the incarceration of women and children for an indefinite length as their asylum cases are processed, a period of time that could take months depending on the backlog of cases which will grow under a stepped-up enforcement regime.

Many fear that widely-floated plans by the Obama and Trump administrations to stem the violence in the Northern Triangle through security measures alone will only lead to increased human rights abuses and militarism while failing to get at the political and economic roots of the problem.

Honduras, for example, was plunged into a brutal cycle of violence following the 2009 Washington-backed coup against its democratically-elected popular leader, President Manuel Zelaya. Indigenous people, social rights fighters and human rights advocates were targeted for murder in the thousands as the country began to earn the shameful title ,“murder capital of the world,” under a U.S.-installed neocolonial puppet government.

Likewise, the people of El Salvador experienced extreme death-squad and paramilitary violence for a decade as Washington backed a right-wing military government which committed atrocities against civilians suspected of supporting or sympathizing with the Farabundo Marti National Liberation Front, or FMLN. The U.S.-backed violence pushed Salvadorans toward the United States while groups of disposessed migrant youth formed street groups that eventually evolved into transnational criminal syndicates such as Mara Salvatrucha, widely known as MS-13. U.S. President Donald Trump has pointed his small fingers at MS-13 as a justification for draconian “tough on crime” and immigrant-scapegoating measures, while U.S.-backed local elites enjoy political backing from Washington, while an elected FMLN government is in power.

Guatemala, another country plagued by neocolonialism and imperialist meddling, continues to undergo instability and violence under a former comedian president and remains dependent on U.S. aid, while suffering some of the highest rates of femicide in the world, alongside Mexico and its Northern Triangle neighbors.

The MSF report calls for an increase in formal resettlement and family reunification measures by Central and North American governments as a minimal measure to address an urgent humanitarian crisis that continually endangers migrant lives.