Change of the Times, Otto Guevara With New Girlfriend

The convention to see a political leader  his or her spouse at their side in Costa Rica is no longer. Nor is  the convention of their personal lives delved into in the press. 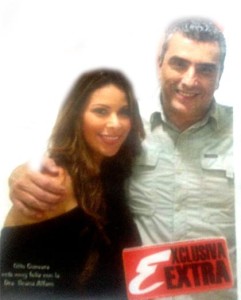 Few know the today’s current leaders are without a “significant other”, single men or women who reach out to the public for votes, promising this, that and the other, but telling very little what goes on behind the scenes, events that shape the person and the quality of their leadership.

As founder of the Partido Movimiento Libertario (ML) and three times (2002, 2006 and 2010) presidential candidate, the private life of Guevara made the headlines in 2010, before the elections when his then girlfriend and soon to be wife, Deborah Formal, refused communion at a church service.  Formal was seen on national television pocketing part of the host after receiving Eucharist at Catholic Mass.

That unusual act by Formal is said to have cost Guevara the 2010 election. And possibly the calling off of the wedding set for December 18, 2010. Neither of the two are talking about it, nor to each other.

This week, Guevara’s persona life made the headlines, this time sporting a new beau. She is Dra. Ileana Alfaro. Guevara and the young doctor have been seen and photographed in public, confirming they are “an item”.

Asked about her ex’s new relationship, Formal told the Diario Extra, “I know nothing of that, but if he has a girlfriend I wish him a lot of happiness.”

Like the lives of most of Costa Rica’s politicians, very little is known about Guevara’s personal life, much less of his new girl.

All we know is this: Otto Guevara Guth (born October 13, 1960) is the son of civil servants. His father, Claudio, was a physician for Costa Rica’s social security system. His mother, Mariechen, worked for the Social Security system before resigning to run the family’s tourism business.

Failing to see any representation for his values in Costa Rica’s traditional parties, Guevara founded the Movimiento Libertario in 1994 to challenge the conventional orthodoxy of Costa Rican politics which he saw as lurching towards greater corruption and less respect for the individual rights of his people. He believes that the principles of moderate intervention of the State and more economical freedom as the best way to improve the lives of the Costa Rican people.

QCOSTARICA - Five of the 82 cantons of Costa Rica register fewer than 10 active cases of covid-19 to this date, according to the...
Health

QCOSTARICA - The International Monetary Fund (IMF) finally said yes to the loan for almost US$1.78 billion and to the fiscal adjustment commitment proposed...
Economic Recovery

QCOSTARICA - Consumer pessimism decreased slightly for February 2021, compared to November of last year, however, uncertainty around the economy remains high and the...
HQ

QCOSTARICA - Some 36,000 people from 14 indigenous territories in the South and Atlantic zones will benefit from broadband services and fixed and mobile...
Immigration

QCOSTARICA - The quijongo is now in very good health thanks to the care of the people of Guanacaste, who are dedicated to protecting...
The Americas