Chileans to Vote for a New President in December 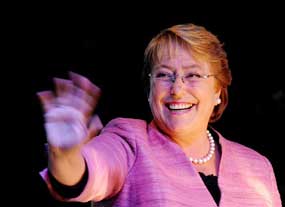 Chileans will have to wait one month to know the name of their new president of the republic, although all the estimates indicate the winner will be Michelle Bachelet, the candidate who had more votes in the elections that took place yesterday. Despite having more votes in the first round of the presidential elections, the former head of state (2006-2010) did not get more than 50 percent of the ballots, needed to be declared as winner.

Bachelet, from the Nueva Mayoría (New Majority) Pact got 46, 74 percent, while her closest rival, Evelyn Matthei, from the Right Alliance had 25, 02 percent.

The former president considered Chileans voted in support of the projects her party wants to implement.

Â¿And we will have a decisive victory on December, a victory that will support the needed program of changes that we have built with the people in these months.

As results of the elections the Progressive Party emerged as the third political force with 10, 93 percent of the votes for its candidate Marco Enriquez-Ominami, while the independent Franco Prisi got 10, 13 percent.

Although none of these candidates compromised their votes with Bachelet, they agreed that she will win in the second round.

On December 15 voters will have to choose between two alternatives: a twist towards center-left with Bachelet, to change the policies of President Sebastian Piñera or the continuity of the postulates of the current government with Matthei.

Bachelet is the daughter of General Alberto Bachelet, who died of a stroke six months after the coup of September 11, 1973, suffering from tortures he received for opposing the coup against the government of Popular Unity.

Matthei is the daughter of General Fernando Matthei, head of the Chilean Air Force and one of the closest collaborators of Augusto Pinochet.

QCOSTARICA - Osta Rica has been the epicenter of regional diplomacy in recent days. The successive visits of the Secretary of State of the...
Reports