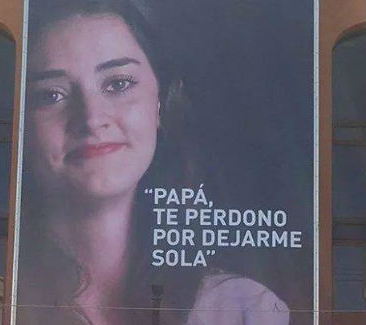 COSTA RICA NEWS — These days it appears that everybody feels his rights are being trampled. The latest season advertising campaign of the mobile phone service provider Claro has riled the Men’s Support Institution Foundation (yes, that right: Fundacion Instituto de Apoyo al Hombre!).

Besides doubling up on foundation and institution in the name as we’ve never seen it before, the group feels that laws enacted for the protection of women have gone too far the other way, resulting in men getting kicked out of their rightful home by vengeful women. They accuse Claro of perpetuating a stereotype.

The ads in question, often appearing on buses, depicts a young woman who is allegedly saying, “Papa, I forgive you for leaving me alone.” It touts re-establishing a dialogue (obviously by phone) with the errant parent. The Foundation Institution (as they would have it) says that women abandon their children as well.

Besides, they add, men are better now that they once were at fulfilling their paternal responsibilities. In the letter blasting the ad campaign, the foundation takes a swipe at what it feels is its bitter enemy, the Law Against Domestic Violence.

For generations, Costa Rican men had it their own way, keeping women as domestic slaves imprisoned at home by economic necessity. Men not only raced around, leaving unsupported children, but sometimes invited a paramour into the home while the wife cooked and washed for her.

The foundation, after using its favorite adjective against the law, “unscrupulous,” asks Sutel, the telecommunications watchdog agency, to punish Claro for its alleged sexism. Claro, based in Mexico with, presumably Latin males in its advertising team, has been in trouble before.

Last April 27, it published on Twitter a statement that caused a firestorm. The firm had to back away with a public apology. The comment read, :”The ‘no!’, of women comes from the Latin for, ‘Beg me a little more.'” It seems that women didn’t like this “definition” one bit…

Comment: We realize that once in a while one can run across a woman taking unjust advantage of the law, But the unbridled abuses of men in the old Latin culture was incredible. Yes, most Latin men were loyal to their wives and families but no safeguards existed to protect wives, especially from that refuge of bullies, domestic violence.