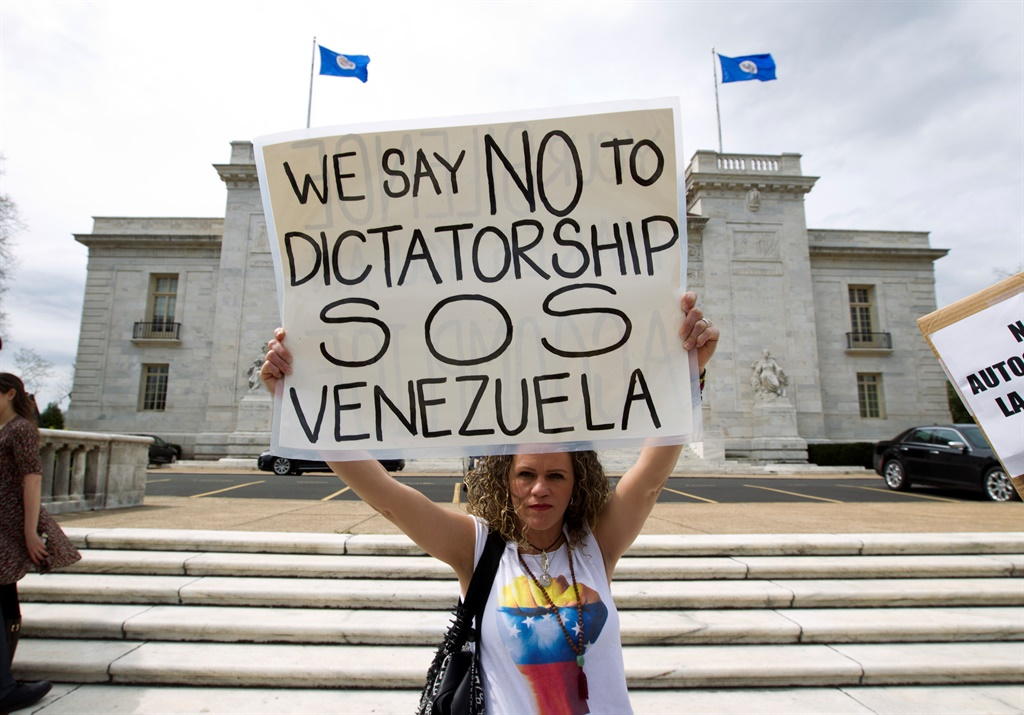 TODAY VENEZUELA, Caracas (news24.com) Protesters clashed with police in Venezuela on Tuesday as the opposition mobilised against moves to tighten President Nicolas Maduro’s grip on power and vowed to continue demonstrations.

Nine protesters were injured, including one who was shot in the leg, said Ramon Muchacho, mayor of one of Caracas’s districts. None of the injuries were life-threatening, he said.

Protesters hurled stones at riot police, who fired tear gas as they blocked the demonstrators from advancing along Libertador Avenue through central Caracas, where pro-government activists also marched.

An estimated 1 000 people tried to march to the National Assembly to demand the government restore powers to its opposition majority. Lawmakers were among the marchers.

Maduro said that the demonstration was aimed at fostering violence in the country.

“Today, they tried to fill the streets of Venezuela with violence and blood,” said the president, speaking from the southern state Apure.

“I can say now… that peace triumphed in Caracas and in Venezuela,” he said.

The opposition called for new protests on Thursday.

“We’re going to continue to fill the streets to defend democracy and the right to vote,” Julio Borges, National Assembly president and a long-time opposition leader, told reporters.

The majority opposition also announced it would take steps Wednesday in the legislature to fire Supreme Court justices.

A move by the top court last week to take over the legislature’s powers sparked international condemnation.

The United States and other powers backed the opposition’s calls for the government to allow timely elections and release political prisoners.

The court later backtracked on its move, but the opposition pressed ahead with calls for demonstrations.

The head of the Organization of American States (OAS), Luis Almagro, condemned the crackdown “in the strongest terms,” branding it “brutal repression.”

“I am once again obliged to demand that the Venezuelan government immediately stop violating the rule of law, reestablish democracy, recognize the civil and political liberties of the people, and immediately end this repression,” Almagro said.

Borges, and former presidential candidate Henrique Capriles, were among the opposition protesters who felt the sting of police tear gas Tuesday.

“This is how they show disrespect for people sworn in as lawmakers,” Borges said on Twitter. “Lawmakers assaulted on Libertador Avenue as we headed in to hold a session.”

Lilian Tintori, wife of jailed opposition leader Leopoldo Lopez, told reporters: “They used tear gas bombs against us. It was like war.

“Venezuela is in the grips of a dictatorship but we are going to free it.”

The center-right opposition wants to remove the socialist president from office, blaming him for an economic crisis that has caused food shortages in the oil-rich nation.

Maduro says the crisis is the result of a capitalist conspiracy. The opposition has urged the military to drop its support for him, but so far he still has the public backing of the high command.

“We want liberty in Venezuela. This is a dictatorship,” 56-year-old nurse Maria Gonzalez yelled at police.

“Soon there will be no more food. Is that what you want for your children?”

In the pro-government march, thousands of people denounced the Organization of American States for criticizing the Venezuelan government over the court move.

“We support Maduro against these attacks, which seek to carry out a coup d’etat,” said another demonstrator, Angelo Olivo.

Venezuela announced on Sunday the beginning of a 30-day electricity rationing...
Read more