(QCOLOMBIA) -Colombian President Juan Manuel Santos said on Wednesday he will seek a second term in next May’s election, a widely expected decision that could offer him another four years to pursue a peace process he initiated with Marxist FARC rebels. 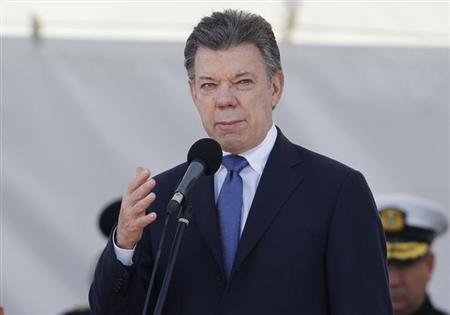 “I am running because I am convinced we have advanced sufficiently and finally it is possible to reach that future of prosperity and peace that all Colombians deserve,” Santos, 62, said in a televised address to the nation.

“I am doing it because when you can see the light at the end of the tunnel you don’t turn back.”

Santos, a Harvard-educated journalist and son of one of the nation’s most influential families, will take on opposition candidate Oscar Ivan Zuluaga in a campaign likely to focus on how peace with the rebels would transform Colombian society after five decades of war.

Polls make Santos a clear favorite to win, though probably in a second round of voting.

Neither candidate would be likely to upset investors as both are former finance ministers and seen as market friendly. Economic growth has slowed in the last year on the back of weak overseas demand for local industrial goods. But output is expected to pick up in the coming months and provide a boost to Santos.

Still, Zuluaga, a one-time senator and provincial mayor, charges that FARC negotiations have damaged the $360 billion economy. He accuses Santos of offering the rebels too many concessions and pushing talks so as to enter the history books.

Zuluaga is an ally of former President Alvaro Uribe, a fierce critic of Santos since they fell out in 2010.

Santos began negotiations with the Revolutionary Armed Forces of Colombia (FARC) a year ago.

Many Colombians are worried about the potential radicalizing effect on their traditionally conservative politics should FARC leaders be allowed to run for seats in Congress and other public office.

Zuluaga and his mentor Uribe are infuriated that the FARC may be offered soft jail terms – or none at all – for crimes against humanity if peace is reached.

“He’s handled many things badly. I’m not in favor of the peace process – we shouldn’t negotiate with the FARC, they are terrorists,” said Diego Fajardo, 44, a cafe owner who said he would not vote for Santos.

While most expected Santos to run again, he waited until the last moment to reveal his plans, taking advantage of recent progress made at the negotiating with the FARC. He had until November 25 to make his decision.

In Havana, government mediators are working through a five-point agenda with some three dozen rebel leaders, seeking to put a stop to bloodshed that has left more than 200,00 people dead since it began in 1964.

Earlier this month the two sides reached agreement on one of the toughest items on the agenda: FARC political participation. While details of the accord have not yet been revealed, the rebels are expected to be allowed to hold some sort of public office and possibly gain access to congress.

While Colombians are desperate for peace, they were beginning to tire of the slow pace of talks and FARC leaders making political statements from the podium while stepping up attacks on military and civilian targets.

“I’ll vote for Santos to give him the opportunity to finish what he has started with the peace process. That’s the most important thing,” said Monica Sanchez, 47, as she served corn bread in a Bogota store. “We cannot continue with this war.”

Today, Sunday, June 13, only EVENS can circulate. The measure is countrywide and applied between 5:00 am and 9:00 pm, save for those under the...
Coronavirus