The current administration is pushing to leave the work underway by the end of its term so that the next will not reverse it, as has been done in the past

Representatives of the main railway equipment construction companies in the world were in Costa Rica in recent months sizing up the concession project – which will open in 2020 – for the electric train of the Greater Metropolitan Area (GAM).

To expedite the paperwork in the project, it was decided to carry out several procedures in parallel, said  First Lady Claudia Dobles, who is also the coordinator of the urban electric train’s work team.

The idea is that when one step is completed, the next one is already quite advanced, and so on, for example, at the moment, work is being done on the bill that will define the State’s contribution to make the project profitable and reduce the impact on the user fees, an amount estimated at US$400 million to US$600 million.

The idea is that this bill is approved at the same time that the draft tender is delivered next March, to complete the adjudication before the end of 2020. 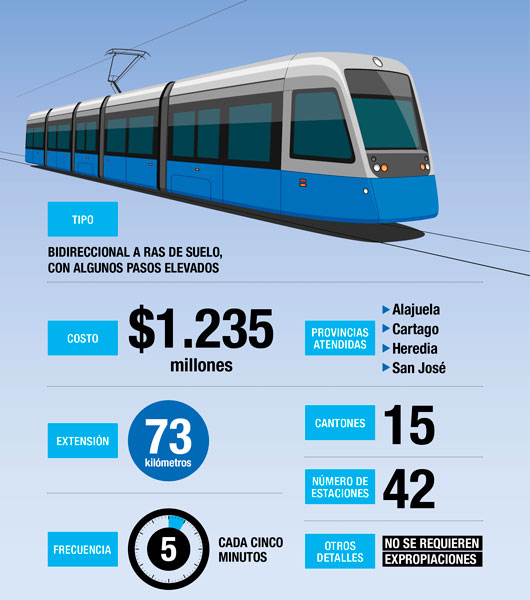 “The rush responds to the challenge of the Carlos Alvarado Government to have the concession work, hopefully, under construction, so that there is no possibility that the next Government will reverse, as has been done in the past,” said Doubles.

The electric train is the flagship work of this administration, proving it as a symbol that the country can carry out the infrastructure works with the lags.

The system will meet the demand for transport between Paraíso de Cartago and Alajuela; a will be a 75-kilometer, two-way network, with a potential of some 1.5 million passengers.

“The electric train is important because it is a country project, it is not from the Alvarado Quesada administration, it is from Costa Rica. It is a work that will not be our turn to inaugurate it, it will correspond to the next administration and to the one that follows because it will be done in stages,” said the First Lady.

The electric train is seen as a positive move forward by many, including the former head of the Incofer, Miguel Carabaguíaz, whos said: “The train will allow many citizens to leave the car at home, even those who come from Cartago or Alajuela”.

The estimate is that the train will mean 25,000 fewer vehicles on the road daily, according to a study done at the end of the Laura Chinchilla’s administration (2010-2014) when Carabaguíaz was at the helm of the railway.

Yolanda Fernandez, Chairwoman of the Chamber of Commerce, said: “Having an electric train would improve people’s productivity and quality of life, since, on average, Costa Ricans take three hours (daily) to move to their workplace.”