Construction Of Circunvalacion North To Start in 60 Days

An estimated 100.000 vehicles a day would move from La Uruca and Calle Blancos with the construction of the north link of the Circunvalacion (ring road) – officially Ruta 39 – that was first proposed in 1955, suffering setbacks with the passing years.

This government seems to be serious in completing this important link that would remove tens of thousands of cars daily from the streets of downtown area of San Jose.

According to a report by La Republica, construction is expected to start in two months. In fact, the consortium Estrella – H. Solis – says it has already begun soil testing for the important work of bridges and viaducts. 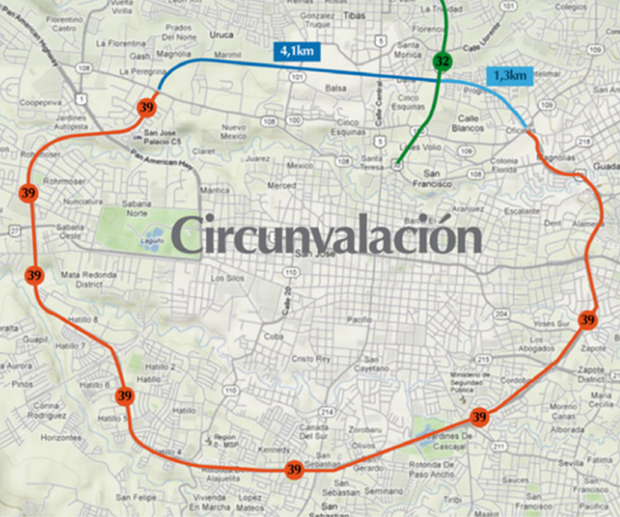 The work, at a cost of US$150 million dollars financed by a loan from the Banco Centroamericano de Integración Económica (BCIE), would take traffic from the built portion in La Uruca (from the old Burger King) and move it north through Tibas and connect to the Calle Blancos (by Walmart), where it rejoins the built portion. 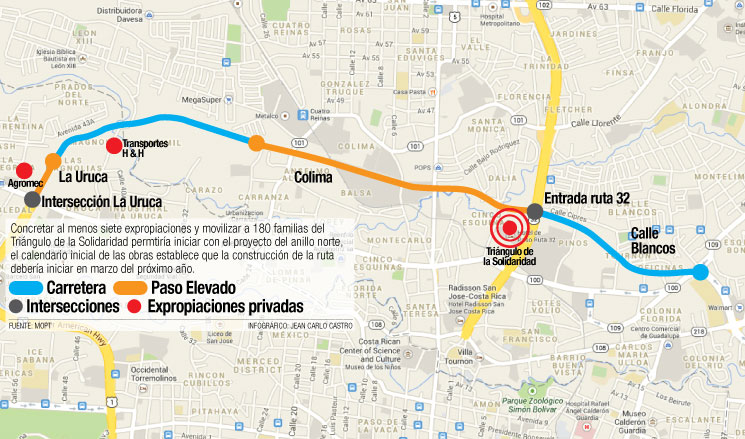 The completed ring would allow traffic to enter and get off at different points without having to weave through the streets of downtown San Jose.

Setbacks to the project have included difficulties in expropriations and problems with the relocation of more than 150 families in settlements in the path of the road. The lack of funding has also been a project killer over the years.

The project is expected to be completed by 2018.

In 1955, Eduardo Jenkins proposed a ring road (Circunvalacion) around San Jose. In 1979 began the construction of the current ring road, from La Uruca to Calle Blancos on the south side.

In 2000 the government acquired the land to build the north section.

In 2012 the government decides that US$150 million of the a US$340 million dollar BCIE loan be used for the construction of Circunvalacaion norte.

In March 2014, the Estrella – H. Solis consortium is awarded the project, with a construction schedule of 18 months.

In September 2014, nothing has happened, save for the debate over should the road be 4 or 6 lanes.

In April 2015, the Comptroller General authorizes construction of the road to be in phases.

Later that year, in September 2015, the government continues with difficulties to remove the settlements in the path of the new road.

In June 2016, the removal of the families from the Triangulo de Solidaridad is complete, with priority to construction.

In July 2016, the consortium builder announces it will start construction in 60 days.

Although the builder has announced the start of construction ( in September), the final chapter on getting this road started may not be written yet.