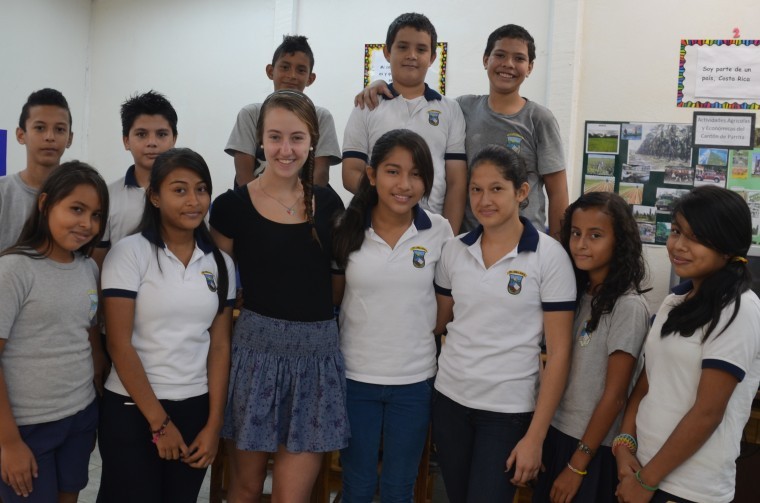 For the month of November, we are spending our time in Parrita, Costa Rica.

I’ve been here many times because my parents lived and worked here 20 years ago, and it’s really enjoyable to be in a place that is almost like home. Our house is right on the beach, so I get to swim in the Pacific Ocean almost every day!

We are volunteering in the same place my mom volunteered years ago: an elementary school called La Julieta. We are teaching English to a third-grade class and a sixth-grade class. My mom and I do most of the teaching, but my siblings try to help out when they can.

With the third-graders, we teach songs in English and play games with them. They also asked us lots of questions about the United States.

With the sixth-graders, we have them write in English, practice speaking and play games to test their vocabulary.

Since a lot of people in Costa Rica listen to popular English music, we also translated some of their favorites into Spanish so they could understand what the songs meant.

The first song we translated was “Little Things” by One Direction for the girls. Then we did “Three Little Birds” by Bob Marley, which everyone liked, and lastly, “What I’ve Done” by Linkin Park for the boys.

For both age groups, we video-chatted with classes from home at Pennridge Central Middle School and J.M. Grasse Elementary School, and they asked each other questions, which both groups of kids enjoyed.

In Costa Rica, kids attend school from February through November. Elementary school includes kindergarten to sixth grade, and high school is seventh to 12th. In elementary school, the students come for classes either in the morning or the afternoon, and lunch is included for school, so they don’t have to pay.

Something very different about the education in Costa Rica is that if a teacher cannot come to school for whatever reason, they don’t have class! From kindergarten through 12th grade, students wear a uniform to school.

At La Julieta, the kids can buy extra food at a little store called a “Soda,” and they have open-air rooms with no hallways because it’s hot all the time, all year-round.

I love teaching the kids, and it’s a great opportunity to practice my Spanish. We get to visit friends we’ve known for years and relax on a beautiful beach.

Costa Rica is a peaceful break from all the traveling I’ve been doing for the past four months.