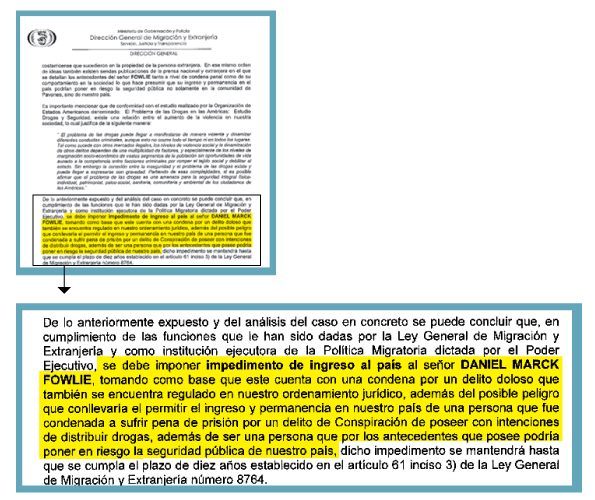 Q COSTA RICA – Is it ‘extreme vetting’ or just revenge by Costa Rica authorities in issuing a ban for Daniel Fowlie from entering to Costa Rica, an American who was convicted of drug trafficking in the United States.

On Thursday, February 9, Dirección General de Migración y Extranjería – Costa Rica’s immigration service, issued a resolution (of which La Nacion says it has a copy) based on an order by the Minister of Security, Gustavo Mata, banning DANIEL MARCK FOWLIE from entering the country.

The document was signed the after Fowlie left Costa Rica by way of the  Juan Santamaria (San Jose) international airport, bound for Atlanta, USA.

In 1991, the 83 year-old was convicted in the United States to 30 years in prison and the payment of US$1 million dollars for leading one of the largest marijuana trafficking networks at the time.

The ban is permitted under two provisions, paragraphs 3 and 4 of Article 61 of the Ley General de Migración y Extranjería (Immigration Law), that can prevent anyone from entering Costa Rica.

The first, a person can be refused entry if in last ten years has served a prison sentence in Costa Rica or abroad.

The second is applied when “the person’s entry is considered to compromise public security”.

According to the Security Minister, the residents of Pavones del Golfito de Puntarenas, where Fowlie has properties, have expressed concern about his presence in the area.

“The neighbors claim that they feel insecure because they have received information that narco (drug trafficking) organizations are not liking the presence of this man because they can consider him a rival. They are afraid that it may break out into a (violent) dispute,” said Minister Gustavo Mata.

The Immigration service issued their first ban against Fowlie in 2005.

However, on January 13, 2016, Fowie returned to Costa Rica, entering the country without any problems. At first authorities thought he had entered illegally; nevertheless, his entrance was legal, entering by way of the San Jose international airport. This was possible because he had a new passport, issued to him by the U.S. in November 2014*.

“I have issued clear and concrete instructions that if this person tries enter with a new passport, with a different numbering, he immediately be prohibited from entering the country,” said Mata.

According to Migracion, in the past year, Fowlie has entered and left the country on five separate occasions with this new passport.

The ban was issued the day after he left.

Gisela Yonckchen, the director of Immigration, explained that the American will be informed about of his denied entry on his next attempt to enter the country.

Minister Mata calls Fowlie as a ‘undesirable person for Costa Rica’ and considers that his presence on national territory cannot be allowed especially at a time when the country is in an intense fight against drug trafficking.

Mata assures that the policy is directly from President Luis Guillermo Solis. “It is necessary to avoid that undesirables, with criminal records, enter the country. We cannot allow the country to be seen as a hiding place or a place for foreigners to commit crimes. Under this premise and taking into account the historical moment that we are in with all the increase in organized crime and the amount of cocaine is being moved trough (the country) we cannot allow it, the law allows (the ban),” said Mata.

Why would Fowlie come back to Costa Rica?
The sensible reason is that the American wanted to recover his 1,000 acres of land he lost in 1987 following his 30 year drug trafficking sentence in the United States.

Fowlie lived in Pavones de Golfito, Puntarenas between 1974 and 1987 and thanks to being financially well to do, built schools and bridges in the area.

Reports of the time indicate that Fowie had contact with Robert Vesco, a fugitive criminal United States financier.who took refuge in Costa Rica. Fowlie was also said to have had close ties Rafael Caro Quinto, the Mexican drug trafficker who founded the now-disintegrated Guadalajara Cartel and brother to drug trafficker Miguel Caro Quintero, the founder and former leader of the extinct Sonora Cartel.

Fowlie was arrested in a Mexican resort, after the U.S. accused him of being the leader of a major marijuana trafficking organization. He was extradited to California in 1990 and convicted in 1992.

Fowlie was released in 2005.  Fearing his return to the country, according to former immigration director, Marco Badilla, that year the immigration service issued a ban against Fowlie. The ban was for 10 years.

Are Huawei smartphones the most favorite brand in Costa Rica? But...
Read more