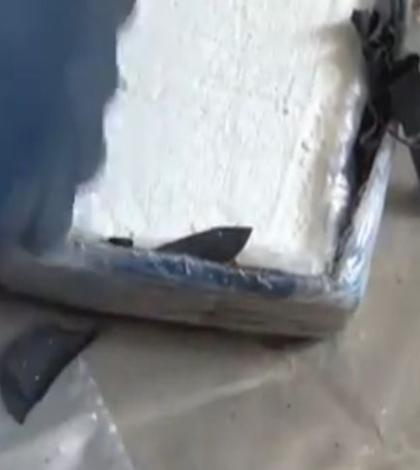 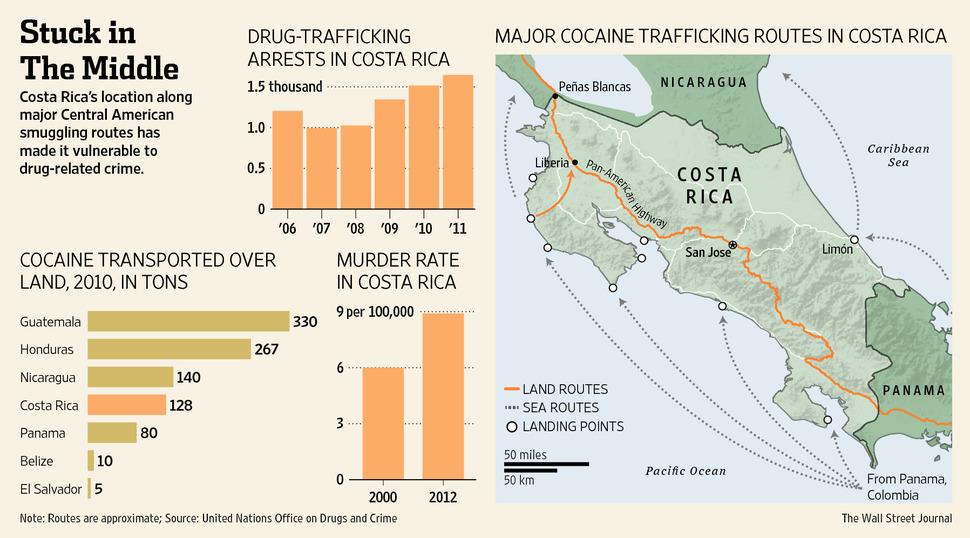 WSJ.com/ Mexican and Colombian cartels have already turned parts of Guatemala, Honduras and El Salvador into a major drug-trafficking corridor, while driving up homicide rates. They are now pulling in Costa Rica, Central America’s standout economy and democracy.

While its tropical beaches, cloud forests and proximity to the U.S. are selling points to millions of tourists, Costa Rica’s location has also attracted traffickers hauling cocaine from Andean nations northward.

“Our geography has us prisoner,” said President Laura Chinchilla, in an interview.

The U.S. State Department said in an annual narcotics report released last week that Costa Rica is facing drug violence and crime due to its “inadequate resources and complicated bureaucracy.” It said Costa Rica should enact laws that target criminal groups.

Costa Rican antidrug police seized 15.5 tons of cocaine last year—worth more than $2 billion on the U.S. street—more than double the amount the year before, the Public Security Ministry said recently.

There are three checkpoints here, two for a long line of trucks that stretch for miles in both directions, and one for people crossing the border on foot. Drivers sling hammocks underneath truck beds to snooze during the some half-day waits to cross the border.

The checkpoint for thousands of people who cross the border on foot each day is a rickety wooden rain shelter manned by a sole police officer at a picnic table.

“It is very rustic. It is old,” said an antidrug police official. “It makes [their work] more difficult. There isn’t enough good equipment.”

Shifting patterns in the drugs trade in the 1990s and 2000s due to the weakening of Colombian cartels and Mexico’s war on its own cartels are prompting drug gangs to step up their activity in Central America, an isthmus of mostly small and weak governments.

Antidrug seizures peaked in the late-2000s, as Costa Rican authorities captured large hauls of cocaine from boats off the Pacific Coast. Public Security Minister Mario Zamora said that crackdown prompted cartels to seek other routes and ways in which they more frequently evade detection.

“The technique was to carry large quantities [of cocaine]. Now they use small amounts,” he said in an interview. Cartels “take other routes where they are fewer police. They are always studying to find the alternative route.”

Still, more than 80% of the South American cocaine trafficked to the U.S.—the world’s biggest cocaine consumer—was moved through Central America, according to the State Department’s report last week. That is a change from the 1980s, when most cocaine was shipped through the Caribbean.

The White House included Costa Rica on its list of major illicit drug transit or producing countries in its most recent report on the subject. It was the third time this tiny nation earned that distinction, which included 22 nations, most of them in the Americas.

Ms. Chinchilla, who took office in May 2010, is one of a growing number of regional leaders who have called for debate on the legalization of drugs to help curb demand and reduce violence.

U.S. officials have so far rejected those calls.

Honduras, El Salvador, Nicaragua and Guatemala are bearing the brunt of the assault by narcotraffickers. Overall, the U.N. says Central America is the world’s most violent noncombat zone. Honduras, for instance, has a per-capita homicide rate of 92, compared with about five per 100,000 residents in the U.S.

But now, Costa Rica a relatively peaceful and prosperous country compared with its neighbors, is under assault. It is a major concern for a government that prides itself on its high marks for literacy and health care. Costa Rica abolished its military in 1948 and its citizens enjoy the benefits of heavy social spending.

But it is hard-pressed to match the power and stealth of drug cartels including Mexico’s Sinaloa cartel, which Costa Rican law-enforcement officials say is the biggest threat.

“It is easier to smuggle up through Central America than try to get it directly into the U.S.” by airplane or boat, said a senior U.S. law-enforcement official. “They can also avoid detection or being investigated by U.S. law enforcement.”

Along with the increased flow of drugs has come a rise in homicides: between 2005 and 2010, homicides in Costa Rica rose 71% to 518. The killings have declined slightly over the last two years, with 394 murders in 2012.

To help fight violent crime, Costa Rica last year boosted its police budget by 11% from 2011 to $351.5 million—slightly less than the police budget of Baltimore—to fight drug-related and common crime.

Since 2009, Central America has received nearly $500 million from the U.S. under a security initiative to fight drug traffickers.

Some say the country is by far the best prepared in the region to deal with the problem, but it must act fast.

“The levels of violence and criminality have not reached the level that have in the north” of Central America, said Adriana Beltrán, a senior associate at the Washington Office on Latin America, a think tank. “They can address this without it having get to that critical point.”

QCOSTARICA - In the second week of the new...
Labor