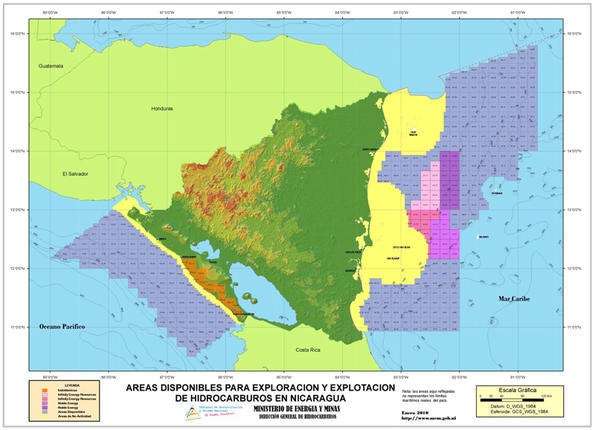 Good fences make good neighbours. It is easier to be friendly with your neighbor if neither of you trespasses upon the other’s property or privacy. For decades that hasn’t been the case between Costa Rica and Nicaragua, who at one time or another have been in a squabble over territory.

The latest is a claim by Costa Rica’s Foreign Minister, Enrique Castillo, who on Monday accused Nicaragua of offering oil concessions in Costa Rican territory.

Castillo, in his letter to his Nicaraguan counterpart, demands that “Nicaragua not grant concessions for the oil exploration of blocs of land or maritime areas in the Pacific Ocean nor the Caribbean that cross into Costa Rican waters”.

Costa Rica demands the “immediate withdrawl” of all promotional materials relating to concessions listed in the folder “Petroleum  Promotional  Folder  of  Nicaragua“, produced by the Nicaraguan Ministry of Energy and Mines.

According to Castillo, a total of 18 blocks in the Pacific and 55 in the Caribbean offered by Managua violate Costa Rica’s borders.

Costa Rica again describes the act one of arrogance and typical of “an expansion policy” by the Ortega government.

“This is another manifestation of the expansionist policy of Nicaragua, of arrogance in its relations with Costa Rica. A further act of hostility, and we are responding today (yesterday) with a note of protest”, Castillo said.

Costa Rica’s ambassador to Nicaragua, Harold Rivas, declined to offer his point of view, simply noting that he received the letter from his boss and was passing it on to Nicaragua’s Foreign Minister, Samuel Santos. Rivas added that his role is one of a “bridge” between San José and Managua.

In 2011,Costa Rica declared a three-year moratorium on oil exploration.

The two neighbours are still locked into battle over Nicaragua’s 2010 alleged invasion of the Isla Calero, an area on the Caribbean coast that both countries claim to be “in their” territory.

That case is before the International Court in The Hague. Both countries have agreed to honour the decision of the court when it is handed down.