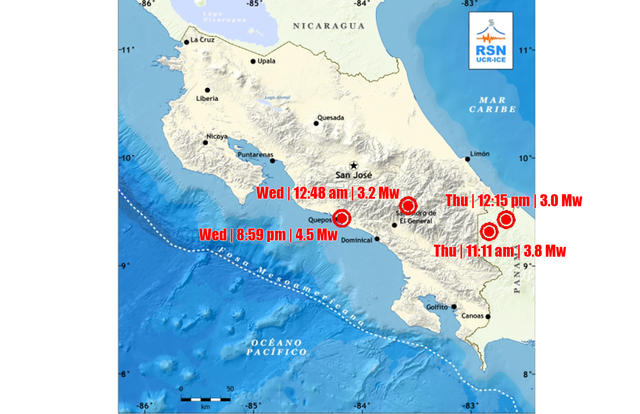 Eleven earthquakes, four of which were greater than 3.0 on the Richeter Scale, shook Costa Rica in the past week. The quakes were in different areas, mainly concentrated in the middle and south of the country.

According to the Red Sismológica Nacional (RSN) -National Seismological Network – of the University of Costa Rica, the first quake was on June 8 at 1:50am, a quake registering 3.5, located 2km southwest of Paraiso de Cartago. A minute later, twelve hours later, at 1:51pm, a 2.8 quake was registered 3km northeast of Orosi de Paraiso de Cartago.

Click here for the latest readings from the RSN.

Seismological activity is normal in Costa Rica. Experts tell us there is nothing to be alarmed.

- Advertisement -
Paying the bills
Previous articleTrain to Puntarenas
Next articleHomosexuality: Don’t Mention It