Responding to an emergency can and often is a nightmare for Costa Rica’s Cruz Roja (Red Cross), Bomberos (firefighters), and police. 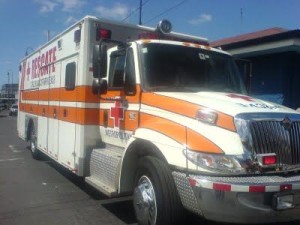 Partly to blame are the bottlenecks and narrow streets. But more worrisome for emergency response personnel is the lack of culture, for many in Costa Rica seeing the red lights and siren of an ambulance or firetruck is synomymous to stop and look, instead of getting out of the way.

Two people that can tell you that first hand are the communications chief at the Cruz Roja, Arnoldo Alpizar and the head of the Bomberos, Hector Chaves.

Both wil tell you that at any time of day getting their emergency response units to the scene is a chore, worse during peak morning and afternoon traffic hours or “rush hour”.

The downtown streets of Alajuela, Heredia and San José are narrow. Cars illegaly parked will reduce the flow of traffic from the narrow two lane streets to one. Sometimes even less.

Pedestrians and cross traffic will block intersections, not bothered by the flashing lights or the sirens. The culture is that “they” have the right of way, the ambulance and firetruck will have to wait their turn.

Alpizar and Chaves add that the highways, like the autopista General Cañas (San José to the airport) and the Florencio del Castillo (San José to Cartago), with their high speed limits, are also a problem: drivers justwon’t give way to emergency vehicles.

Firetrucks and ambulances often have to weave through traffic in their race to an emergency. In some cases, the forced driving has resulted in accidents involving ambulances and firetrucks.

The larger fire trucks have even more problems. Chavez explains that areas in Heredia, Guadalupe, downtown San José and the Circunvalación are major problem areas for them.

But worse problem is one of culture. “People just don’t get out of the way. Some don’t pay attention”, said Chaves.

The Fire Chief said the culture in the country has changed, gotten worse. “Thirty years ago everyone moved over; today there is a lot indifference. Even if 90% of the people cooporate, there are still the indifferent, who like to hinder”, said Chaves.

“Ten years ago, a man who obstructed our passage came later to apologize, because he realized we were rushing to attend an emergency at his house”, said Chaves.